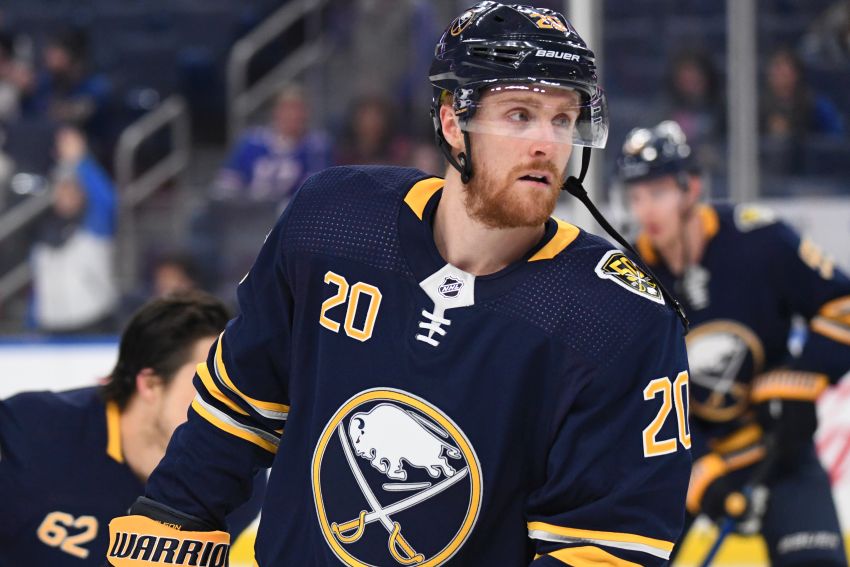 While Wilson, 27, made it back to the NHL – he played 15 late-season games with the Sabres – his recovery was far from over.

“Really dealing with that ankle was a full-year thing for me,” said Wilson, who was injured Sept. 30, 2018.

So when the Sabres waived Wilson before the season and sent him to the Rochester Americans, they gave him what coach Ralph Krueger called a “to-do list.”

“Just being aggressive,” Wilson said he was told by the Sabres. “They know, too, when you’re coming back from injuries, it’s kind of second nature to hold back (in) some areas of the ice. The last few weeks I really focused on being physical, being aggressive, getting in on the forecheck.

“And not only do I do that down there, but it’s my major role up here.”

The Sabres summoned Wilson on Friday after rookie winger Victor Olofsson suffered a lower-body injury in Thursday’s 3-2 overtime win against the Edmonton Oilers.

Wilson, who has played 65 games with the Sabres, mostly skated beside center Curtis Lazar and a few other wingers in Saturday afternoon’s game against the Florida Panthers inside KeyBank Center.

Krueger said “an acceptance of the kind of player he needs to be for us” helped Wilson earn his first recall this season.

“He’s fulfilled that ask out of training camp,” he said.

He added: “He’s checked all the boxes on the asks from training camp and very deservedly has a shot here back up with us.”

With Olofsson out five to six weeks and winger Jeff Skinner (upper body) sidelined another two or three weeks, Wilson could have a chance to stay in the lineup.

Wilson, a regular on the Pittsburgh Penguins’ 2017 Stanley Cup team, tried to seize the extra minutes and opportunities he received with the Amerks.

“I obviously feel a lot better playing a lot and put in tons of situations down there,” said Wilson, who scored six goals and 14 points in 22 games with the Amerks. “I’m thankful for the management and coaches to put me through that.”

Wilson has been hurt twice this season, missing 10 games.

“You can kind of go sideways and feel sorry for yourself. At the same time, I think I’ve learned that everybody goes through that stuff. At this point now, I’m just happy and ready to go.”

Notes: Rookie winger Rasmus Asplund subbed for Olofsson on Saturday beside center Jack Eichel and Sam Reinhart. … The Sabres have beaten the Panthers three straight meetings for the first time since 2011. … The Sabres dressed 11 forwards and seven defensemen. … The Sabres scratched forward Evan Rodrigues for the third straight game.