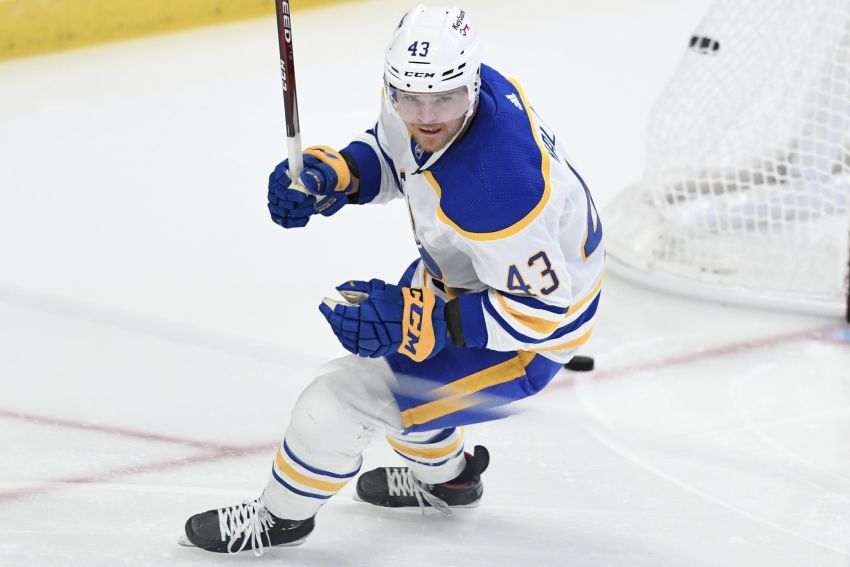 Sean Malone could have opportunities in Buffalo this season. ©2021, Micheline Veluvolu

BUFFALO – For one season, Sean Malone enjoyed having a fresh set of eyes examine him. The Sabres center impressed the Nashville Predators so much he earned a stint on their taxi squad and a one-game promotion to the active roster.

In just his second NHL outing and first in nearly four years, Malone recorded his first point Feb. 9, an assist.

“I wasn’t able to stay in the lineup,” Malone said of his time in Nashville. “I’d like to play a little bit more, but it was nice going somewhere else and getting a new set of eyes on you and knowing that you’re on the cusp of hopefully playing again.”

By returning to the Sabres organization – Malone, 26, signed a one-year, two-way contract on July 28 – he could be on the cusp of playing more NHL regular-season games. The West Seneca native made his preseason debut in Thursday’s 6-2 road loss to the Detroit Red Wings, a game in which forwards Rasmus Asplund and Arttu Ruotsalainen scored for the Sabres.

Malone, a dependable two-way presence, provides much-needed depth at center. If he doesn’t make the Sabres out of training camp, he could solidify himself as a top recall option from the Rochester Americans.

“I don’t really want to speak on too much individually,” Malone said Monday inside KeyBank Center. “I think, obviously, it’s something they’re stressing in camp is there’s a lot of opportunity and spots to fill. For me, it’s still trying to break into the league. I’m looking forward to actually having an opportunity.”

Returning to Buffalo, where he began his pro career in 2017, was an attractive option. In addition to possible opportunities in the NHL, there’s familiarity.

A lot, of course, has changed over the past year and a half. The Sabres and Amerks have new general managers and coaches. Both teams have been overhauled.

Still, Malone knows plenty of people in the organization, including Sabres coach Don Granato, his coach with the U.S. National Team Development Program in 2012-13.

“To see the growth and maturity in him, the confidence in him is great,” Granato said. “I’ve known him since then as a very talented guy and he remains that. … He’s done a real nice job so far.”

Barely a year ago, Malone wanted a change of scenery. The Sabres had just fired Jason Botterill and hired Kevyn Adams, their fourth GM since they drafted Malone in the sixth round in 2013.

The Harvard graduate played his only game for the Sabres just days after his college career ended, joining them when he signed his entry-level contract late in the 2016-17 season. Early in his first tenure, he developed into a strong prospect with the Amerks.

Then injuries began to derail his career. After a rough 2018-19 campaign, he settled for an AHL contract with Rochester and had a terrific comeback season. As a free agent, he drew interest from six or seven teams, including the Sabres, before picking the Predators.

The 6-foot, 197-pound Malone experienced what he called a “wild” season in 2020-21. The COVID-19 pandemic forced the Predators’ AHL team, the Milwaukee Admirals, to opt out of the season. So the Predators placed their minor league players with the Chicago Wolves and split the affiliation with the Carolina Hurricanes.

“It was good for me because the Carolina coach (Ryan Warsofsky) was their coach and he liked me from before, so I was able to consistently play,” said Malone, who compiled five goals and 15 points in 23 games. “You had half and half forwards from each organization, six and six playing. And then the D and the power play was split, so it was a little bit different.

“We had probably 10 coaches on the ice at a time. But I think we had a lot of young players. Just try to make the most of it. Our team was really good. It was actually a fun year.”

Too bad no one except staff and media could see the team up close. Fans couldn’t attend games, so the Wolves played them in their practice facility.

“It was something else,” Malone said. “The glass wasn’t very forgiving. We didn’t have fans. It was a gritty, gritty year but we made the most of it.”