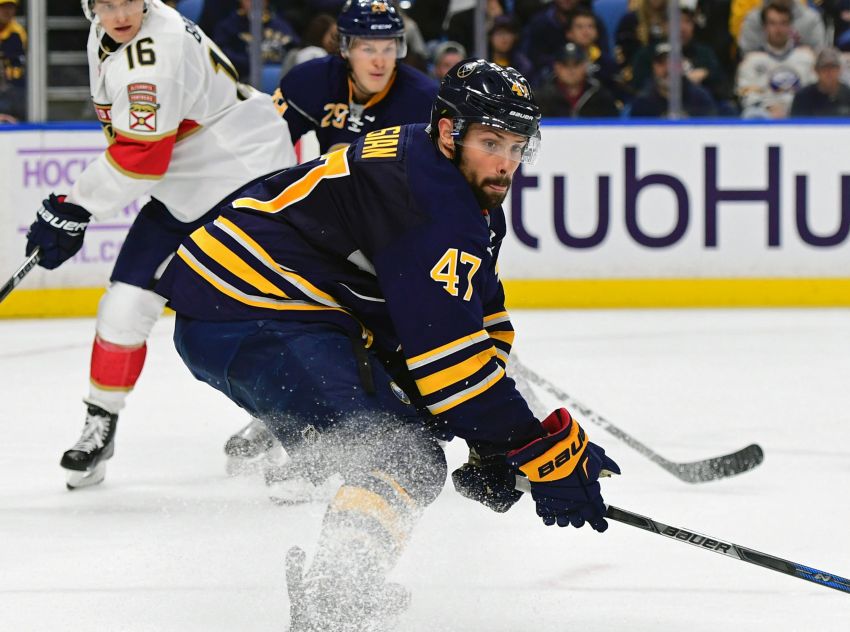 BUFFALO – It was just an innocent play. Early in the Sabres’ 2-1 loss to Minnesota on Nov. 1, defenseman Zach Bogosian said he pinched down in the offensive zone.

“I just caught a rut and my knee just kind of went in,” Bogosian said this morning inside KeyBank Center. “It was kind of a freak thing. … Sometimes the ice will get you. Unfortunately, my knee kind of went the wrong way.”

Bogosian, who skated this morning with his teammates for the first time, has missed the last 18 games.

Tonight’s tilt against the Los Angeles Kings, of course, is out. But the Sabres also play Friday and Saturday. Bogosian said he doesn’t have a target date. He plans to practice Thursday.

The Sabres sorely miss Bogosian’s puck-moving skills, so the Massena native’s absence has been huge.

Bogosian is the only regular defenseman still out. Josh Gorges and Dmitry Kulikov recently returned.

Bogosian was also hurt early last season, when a knee injury cost him the first 18 games.

Some other lineup news:

– Winger Kyle Okposo, out with the flu Monday, skated this morning and plans to play.

“I figured sooner or later we’d play together,” said Okposo, who played with Ryan O’Reilly most of the season.

Changing centers can be “a bit of an adjustment,” he said.

“I had a similar thing on Long Island when I would play with Johnny (Tavares) as opposed to Frans (Nielsen), both extremely good players but different also,” he said.

Early on, Okposo said, he and Eichel might have to rely on their brains.

– Sabres coach Dan Bylsma said the rest of the lineup will be announced before the game. Center Derek Grant missed last game with the flu. If he returns, winger Nick Deslauriers could be out.

Update: Grant is out.

In his last 10 decisions, Lehner is just 1-6-3, a stretch in which the Sabres have scored only 14 goals for him.

“He’s played some good hockey for us and given us a chance to win,” Bylsma said of Lehner. “The goal support hasn’t been there for him. I don’t know if it’s a product of so much of how we’re playing in front of him or if we’re playing differently. Perhaps the opponent, perhaps the games we’ve been in.