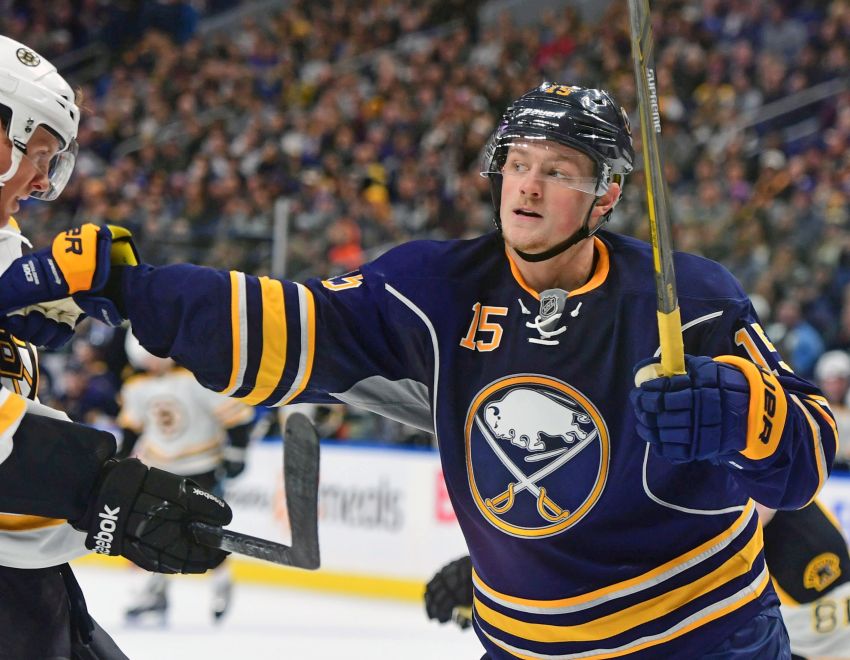 BUFFALO – Sabres center Jack Eichel walked back into the dressing room Sunday looking sullen. His hood was pulled tightly over his head and the normally affable youngster didn’t smile.

A day after his reeling team’s sixth loss in seven games, an embarrassing 3-1 setback that made Eichel lose his cool, the second-year star was still ticked off.

“As a whole team, everyone needs to look in the mirror and we all need to get a lot better,” a blunt Eichel said after practice inside KeyBank Center.

Saturday afternoon’s loss in Boston, Eichel’s hometown, felt more like a 6-0 defeat than a two-goal game. Following the tilt, the 20-year-old reportedly erupted, throwing his equipment and cursing before storming out of the dressing room.

The incident, Eichel said, “was a little bit blown out of proportion.” Still, despite his age, his actions and words get noticed. Eichel, after all, is the face of the franchise.

The Sabres’ struggles clearly have him seething. What needs to change for the last-place team?

“Everything,” Eichel quickly replied. “Power play, I mean, we have a five-on-three, we don’t score. It’s not good enough. Penalty kill, we continue to put pucks on the other team’s stick on the kill. Five-on-five, we don’t score enough goals, either.”

The Sabres are 16th in the 16-team Eastern Conference, just 13-15-8. Translated, they’ve lost 23 of 36 games. After two losses in three days to Boston, the team they’re chasing, the playoffs look highly unlikely. Sportsclubstats.com gives them just a 2.3 percent chance of making it.

“I’m sure not giving up on this, and I don’t think anyone else is,” Eichel said. “Have we (thrown) away some good opportunities for ourselves to put ourselves in a good position? Yes. It’s still a lot of hockey to be played.”

Injuries, of course, haven’t helped the Sabres. They endured a rash earlier in the season – Eichel missed 21 games with a high left ankle sprain – and are experiencing a second wave now, with five players, including centers Ryan O’Reilly and Johan Larsson sidelined.

“I don’t think as a group we should be blaming what’s going on with line changes, injuries, because every team goes through it,” Eichel said. “Obviously, with us, we’ve had some key players injured at key times in the year and we have not played 100 percent as a team in the two years that I’ve been here, which is frustrating. But this is also hockey, and injuries are going to happen.”

Eichel, like most elite young talents, won a lot of games before making the NHL. The current stretch is one of the worst of his career.

“I don’t think it’s about me,” Eichel said. “I think all these guys have probably been winners their whole life. We’re a group. We’re one. We go through adversity as a team together. The highs when we win games, it’s also together.

“I think I speak for the team in saying we’re frustrated in where we’re at. … Everyone here is pretty (angry) with themselves.”

Larsson, who is out weeks, stayed in a Boston hospital dealing with the dislocated left wrist and dislocated elbow he suffered early after Adam McQuaid hit him.

“He’s quietly and not so quietly become … a tough guy to play against,” he said. “He battles hard every night for us, and he’s been a leader in really having that grit and determination in our game. You felt it even in the game (Saturday).”