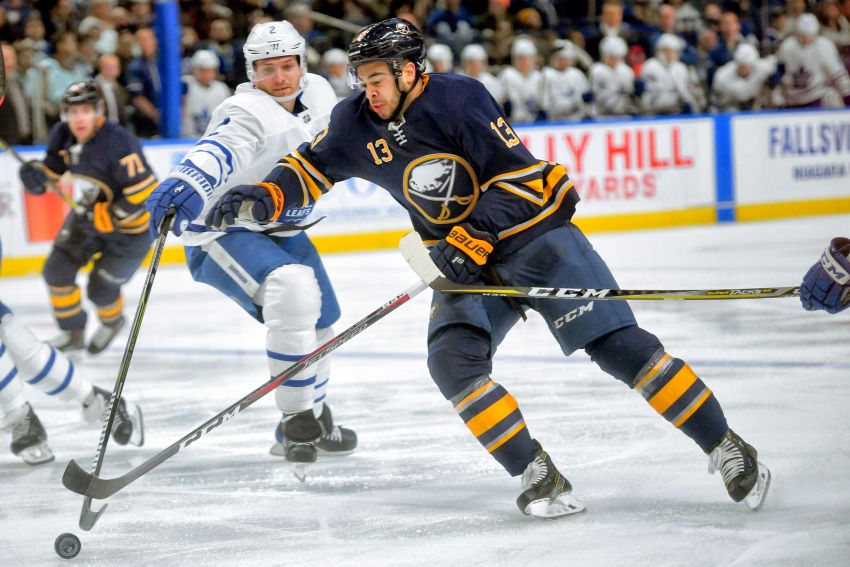 BUFFALO – Casey Nelson believes the opportunity offers a “second chance.” In a few days, after the Sabres complete their disastrous season, about eight players will return to the AHL and begin the Rochester Americans’ first playoff series in four years.

“We all want nothing more than to win a championship,” the defenseman said Thursday inside KeyBank Center after the Sabres prepared for tonight’s tilt against the Tampa Bay Lightning, the start of a two-game, season-ending road trip.

The Amerks’ solid season quickly became the biggest positive in a Sabres campaign widely regarded as the worst in franchise history. As big club stumbled out of the gate, losing seven of its first eight games, the Amerks roared, winning nine of their opening 15 contests.

But not surprisingly, attrition has hurt the Amerks. The Sabres have experienced injuries all season. They also want to examine some of their best prospects.

That’s why top defenseman Brendan Guhle has earned a 16-game look. Goalie Linus Ullmark, meanwhile, played five times before suffering a concussion. Even winger Alexander Nylander was recalled Tuesday. The former first-round pick endured a miserable start before getting on track in February.

So by next week, the Sabres should infuse the Amerks with 43 goals, 129 points and Ullmark, an AHL All-Star, and his backup, Adam Wilcox. The goalies have combined for 31 of Rochester’s 34 wins this season.

Nelson, 25, and winger Nick Baptiste, 22, have received the longest looks from the Sabres, becoming regulars during the second half. The Amerks placed both on their clear day roster, meaning they’re eligible for the AHL playoffs.

“In certain situations, you got to do the necessary things to stay up there,” said Baptiste, who’s in the final season of his entry-level contract. “I think that’s part of the reason for why I’m still up here is that I’ve been able to use my speed, draw a couple penalties, be physical.”

“We’ll have some good nights here and there, and then I feel like can’t really chain them together as consistently as we want,” said Nelson, who has compiled three goals and eight points in 35 games. “You know the good teams win one, two, three, four in a row multiple times … through the year. That’s what it’s about is consistency.”

Baptiste said the Sabres must “be better as a group.” That means trusting the game plan and “be more willing to win for one another.”

“That’s the biggest thing,” he said. “I think we need to understand that individually we’re all talented players. When we’re a group, that makes us a good hockey team. It’s no secret we’re in last place, it’s a tough place to be. But there’s only room for improvement.

“I think if, as a group, we can kind of look ourselves in the mirror and figure out what it is as an individual you can bring to the table to make to be better in a team sense, it’ll help us immensely and improve this team.”

In the near future, some Sabres will replenish Rochester’s roster. None of the organization’s prospects homegrown prospects have ever played in an AHL postseason game.

“That’s just a whole different game, I think,” said Porter, who won the Stanley Cup with the Pittsburgh Penguins in 2016. “For them to get that experience and see how hard teams play and guys play in playoffs, I think that’s going to be a great experience.”

Sunday update: The eight players have been sent back to Rochester.