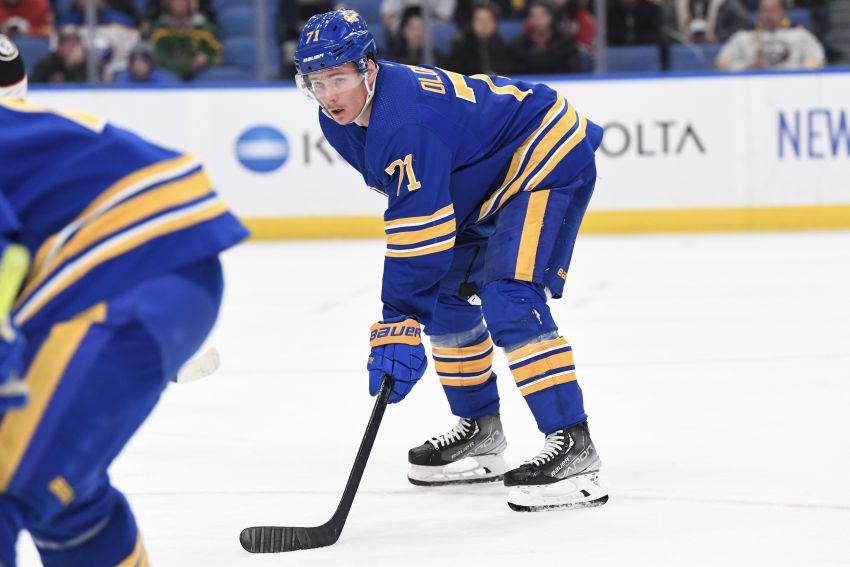 BUFFALO – When he’s healthy, most days after practice ends, you can find Sabres winger Victor Olofsson on the ice honing his greatest skill by shooting pucks.

Olofsson’s lethal wrist shot – his ultra-quick release ranks among the NHL’s elite – elevates him into a special talent, especially on the power play.

But the soft tissue injury that sidelined Olofsson eight games last month has been hampering his shooting. In 11 outings since the Swede returned, he has scored zero goals, a career-long drought.

The Sabres, who carry a seven-game winless skid (0-5-2) into tonight’s road contest against the Winnipeg Jets, sorely need Olofsson to start scoring goals.

The Sabres have mustered only three goals in their last three outings. Their power play, meanwhile, has converted just two of its last 18 chances over a nine-game stretch.

“His injury inhibited his shooting,” Sabres coach Don Granato said of Olofsson following Monday’s practice at LECOM Harborcenter. “That’s the reason why he probably was out so long and that’s his game, is shooting. Specifically on the power play it’s shooting.”

Olofsson, 26, hasn’t been performing poorly, mind you. He has compiled six assists over his goalless stretch. Before his current three-game point drought, he hadn’t gone more than one appearance this season without registering a point.

In Saturday’s 3-2 loss to the Washington Capitals, he scored his first NHL shootout goal in his sixth attempt. In Friday’s 2-1 setback to the New York Rangers, he appeared to score the game-tying goal with 56.2 seconds left in the third period. An offside call, however, negated what would’ve been his first goal since Oct. 31.

“Just got to find other ways to create chances, too, and maybe be a little bit more creative with the puck and hold on and beat guys a little bit more maybe, which I’m working on a lot. It’s been a little bit challenging but I feel confident, I feel good out there.”

What Olofsson called “kind of a weird injury” has started getting better.

Olofsson said the injury “can’t get worse but it’s still been bothering me a lot with the shooting.” After he returned Nov. 21, he said he felt OK at the beginning of each game but the injury “got more sore the longer the games went on.”

“Right now, I feel great, though,” he said. “Been battling with it but it’s getting better.”

He added: “I wouldn’t say I had any issues shooting right now.”

Granato said Olofsson has been “getting more and more comfortable.”

“But I think he’s still dealing with that or getting back to that strength and everything else, timing and all that,” he said.

Overall this season, Olofsson has compiled five goals and 15 points in 19 games. He has pumped 44 shots on goal and has 75 shot attempts (3.9 a game). He has recorded at least one shot in every contest.

While the line hasn’t produced a goal in five games, Granato has kept Olofsson at right wing beside center Tage Thompson and Jeff Skinner. The trio has been noticeable most nights, creating offense but failing to finish.

“He’s doing everything as he should and I’m happy with that,” Granato said of Olofsson. “Some days it bounces for you, some days it doesn’t, but he’s got to keep working the way he has and it will be more good than that.”