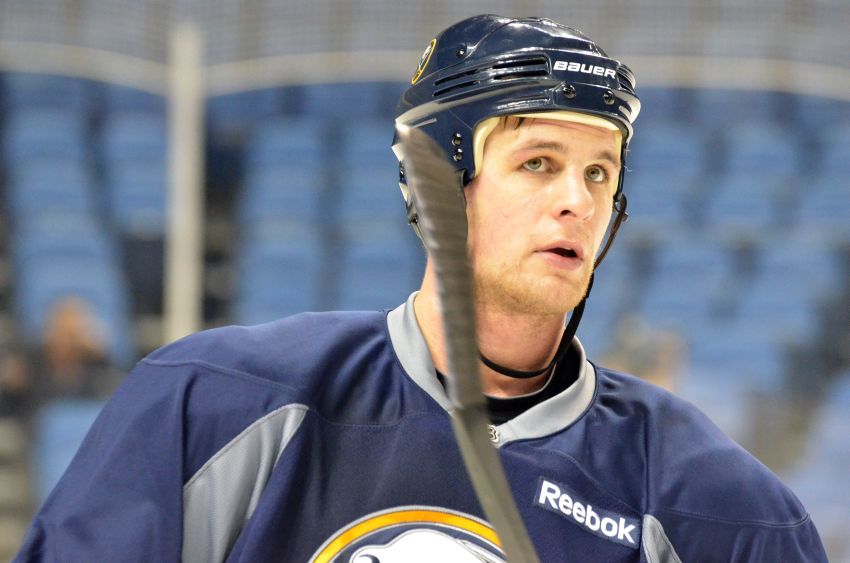 BUFFALO – The Sabres’ injury and on-ice woes could help defenseman Adam Pardy, an NHL regular before numbers kicked him back to the minors this season, carve out a spot on the blue line.

With Jordan Leopold (hand) and Alexander Sulzer (lower body) sidelined, the Sabres on Monday summoned Pardy from Rochester for the second time this season.

He should play tonight in Tampa Bay against the Lightning, the start of a two-game Florida trip.

If Pardy impresses, the Sabres might have a hard time yanking the 28-year-old from the lineup. The defense corps, once thought to be a strength, has played wretchedly this season. The Sabres have allowed 3.32 goals a game, the league’s 28th-worst total.

“You’re always expecting injuries,” said Pardy, who played Feb. 5 before returning to the AHL. “It’s going to happen at some point. You got to be ready for it either way. You don’t know when it’s going to come. You never want to see what’s going on right now here with this start. It’s tough for everybody. There’s an opportunity for me here to come in and try to help out where I can.”

Interim coach Ron Rolston, who coached Pardy until taking over the Sabres last week, liked the veteran element he brought to the Americans.

“He … just kind of settled things down for us, especially when games get hairy and you need that presence just to take care of the next shift,” Rolston said.

Naturally, Pardy, a veteran of 184 NHL games, wants to stick around. He had spent four years in the big leagues prior to clearing waivers last month.

“That’s always the goal,” Pardy said. “You got to keep pushing forward. If I’m not pushing these guys, where’s the competition, where’s the push?”

Rolston had no update on Sulzer, who left Saturday’s 4-0 loss to the New York Islanders early.

“They’re still in the evaluation process right now,” he said.

The Sabres placed Sulzer on injured reserve to make room for Pardy.

“Obviously, he’s playing a lot of minutes, and just the normal bangs,” Rolston said. “He got in that collision with Joe Finley (Saturday).”

The Sabres can take their father or a mentor on the short road trip, a neat experience for many players.

“Some bonding time to give him a glimpse of how I get to give the NHL life,” Sabres winger Steve Ott said about his father, Butch. “That’s pretty awesome for a military dad that worked his (butt) off his whole career.”

Rolston thinks it’s a nice to reward the sacrifices fathers have made over the years.

“For them to be and have the payoff that their son’s in the NHL, it’s kind of a payback and just some time to spend together,” Rolston said.

Owner Terry Pegula has remained silent on the Sabres’ sorry state since coach Lindy Ruff was fired Wednesday, only issuing a statement.

However, his 19-year-old daughter, Jessie, tweeted her disgust during the second intermission of Saturday’s 4-0 loss to the New York Islanders, writing, “Lets call a spade a spade. The Sabres are just really bad.” The tweet was eventually deleted.

The Rochester Americans on Monday officially named Chadd Cassidy as the interim replacement for Rolston, who was promoted to replace Ruff. Chris Taylor will fill Cassidy’s assistant role.