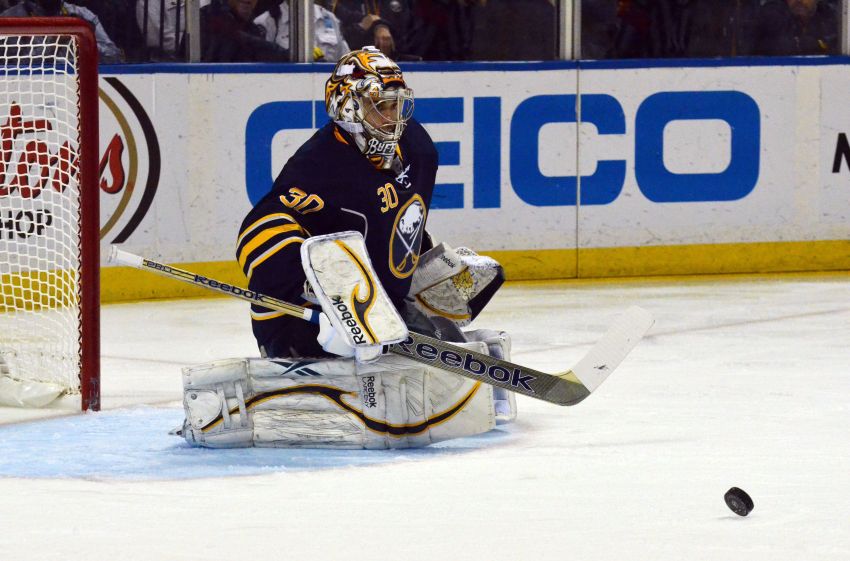 BUFFALO – Nothing has changed. The Sabres are still a mess, perhaps the NHL’s worst team. Since firing Lindy Ruff on Wednesday and naming Ron Rolston interim coach, they’ve lost both games and scored one goal.

The disenchanted crowd inside the First Niagara Center booed and moaned Saturday throughout an ugly 4-0 loss to the New York Islanders, just like they did during Tuesday’s 2-1 defeat to Winnipeg, Ruff’s final game as coach.

The few thousand fans left inside the First Niagara Center then booed the Sabres off the ice as the horn sounded on their fourth straight loss and sixth in seven tries.

The defeat in Rolston’s home debut kicked the Sabres (6-12-1) into 15th place in the Eastern Conference.

Frustration has clearly set in on Sabres, who rank 29th out of the 30 NHL teams.

On Friday, Rolston said the Sabres blink first when staring down another team. Sure enough, with the tilt scoreless late in the second period, the Isles got late goals from Mark Streit and Michael Grabner.

When things go bad, the emotion starts leaving the Sabres and they can’t recover.

“Right now, it certainly is because the work is there, the care is there,” Rolston said. “Now it’s the psyche part for them to stay on and stay with.”

“Yeah, you saw that in the third period,” Sabres defenseman Christian Ehrhoff said. “There was no confidence left, a lot of hesitant things going on. We have to turn it around.”

With 29 games left, the clock’s already ticking on the Sabres’ season.

“Take a look at our group. It’s hard to lose faith in the talent,” Sabres defenseman Tyler Myers said. “Shortened season like this, with as tough as times are going, we have to make our move now. The only way we can do that is to believe in each other. It has to start now.”

Myers believes the Sabres will start improving by doing the little things, making simple plays throughout the whole game.

Within seconds, Miller’s mask hit the ice and a melee ensued with Miller, Martin and Mike Weber in a scrum. Nabokov skated all the way to Miller’s crease.

“Marty’s usually a pretty honest guy,” Weber said. “But he just grabbed Millsie’s head there. We can’t have that. I just tried to get in there. It’s nice to see everyone sticking up for another like they should be.”

Miller added: “I just thought the bump would be that. He didn’t have to try to rip my head off. But that’s hockey.”

Meanwhile, the jeering inside the FNC has probably reached an all-time high during the past two games, with the capacity crowds of 19,070 fans becoming irate as the Sabres implode. Players don’t like it but understand the fans’ frustrations.

“As much as it hurts, they have every right to do it,” Myers said. “Fans’ expectations on us are very high, and they should be. Hockey town like this, with as much support as we get from them, it’s not acceptable for us.”

Weber said the Sabres are working and “did a hell of a lot better job” Saturday.

“We had a mental lapse for two minutes in the second period, which gave them the game,” he said. “We blinked first, which is something we’ve been talking about in here. We need to be a team that just sticks to the program, stay steady, wear them down.”

Myers added: “It’s almost like we’re the team getting worn down every game.”

Streit opened the scoring 17:51 into the second period, pinching to the bottom of the left circle. Grabner’s breakaway made it 2-0 at 18:56, capitalizing on Ehrhoff’s gaffe, an ill-advised cross-ice pass from the point.

The Sabres’ wretched power went scoreless in six tries, leaving it two of the last 46.

They also lost Alexander Sulzer to a lower body injury in the first period. The defenseman will undergo tests today, Rolston said.