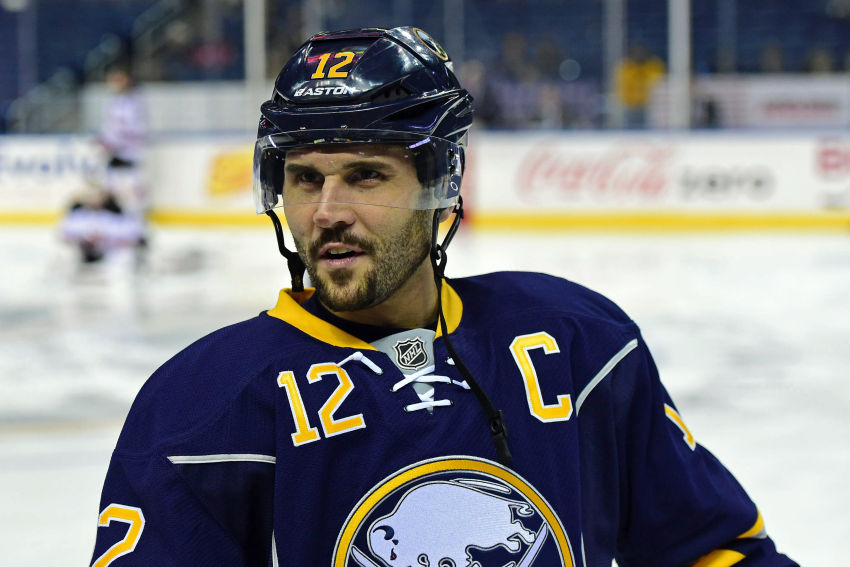 At an age when most players are either retired or reduced to supporting roles, the Sabres still lean heavily on Gionta in his 15th season, skating him more than 18 minutes a game in every situation.

“I feel the overall game is there,” Gionta said Friday inside the First Niagara Center. “It’s just (I’m) not scoring, not finishing.”

Gionta, who has 266 career goals, has only four in 35 appearances this season entering this afternoon’s home tilt against the Detroit Red Wings. The Greece native scored his first goal in nine outings Wednesday in Washington, connecting on Eichel’s nifty feed.

That’s one of only three goals the Sabres have scored in the last three games.

“I think we’d like to see him score more goals,” Sabres coach Dan Bylsma said about Gionta. “I think … I’d put a number of people in that category.”

Gionta, as Bylsma noted, is hardly alone with his offensive struggles. The Sabres have scored only 87 goals in 38 games, just 2.29 a contest. The NHL’s fourth-lowest total puts them at a 188-goal pace. For some perspective, that would be the third-lowest full-season total in franchise history after an NHL-record low 150-goal 2013-14 season and an anemic 153-goal campaign last year.

As expected, the additions of Eichel, the second overall pick, and No. 1 center Ryan O’Reilly have boosted the offense. O’Reilly has 18 goals and 33 points, both team highs. Eichel has 11 goals and 23 points.

But no one else has scored more than eight goals. Only defenseman Rasmus Ristolainen, who has seven goals and 18 assists, has hit the 20-point mark.

The Sabres have 41 home goals in 21 games and just 15 total in the first period all season, both league lows. Their 29 second-period goals rank 27th.

The feeble scoring is killing the Sabres, who have lost 12 one-goal games, including a 2-1 defeat Thursday to the New York Islanders, a contest in which they pumped 43 shots on goal and generated about 20 scoring chances, Bylsma said.

“Given the opportunities we’ve had, given the situations our team has been in, I am surprised that we don’t have more goals, not by one particular person specifically, but I am surprised,” Bylsma said. “We’ve created and done things that you need to do to score goals, and we haven’t always gotten them throughout the year.

“Our last game’s a great example of that. I feel like you should have some goals from the opportunities and positions our team was in.”

Gionta added: “We’re in those tight games, and I think that’s part of the reason we’re not coming out on top of those one-goal games. We got to find ways to get those guys hot, get guys scoring up and down the lineup.”

The Sabres have averaged 29.7 shots a game, 15th in the league. Early on, the power play carried the offense. Thanks to a zero of 24 run over eight games the Sabres have dropped from one of the league’s top units to 14th. O’Reilly’s third-period power play goal Thursday ended the drought.

“I know we’ve done a lot of good things, not only on the power play in the last game, but other games in general we’ve done some good things as a group,” Sabres defenseman Cody Franson said. “We’ve had a lot of chances, just haven’t been able to get it to go.”

Naturally, the Sabres have a slew of forwards struggling offensively.

– Winger Matt Moulson, a three-time 30-goal scorer, hasn’t scored since Nov. 1, a 25-game stretch. He has four goals and 12 points in 37 games and was a healthy scratch Wednesday.

– Injured winger Tyler Ennis, who led the Sabres in goals the last two seasons, has three goals and 11 points in 23 games this season and hasn’t scored since Oct. 27.

– Winger Zemgus Girgensons, who scored 15 goals and 30 points in 61 games last season, has three goals and seven points in 34 games. He scored his first goal in 12 contests Wednesday.

– Center Johan Larsson, who had five goals and 14 points in the final 20 games last season, has one goal and four points in 35 appearances.

– Winger Marcus Foligno has only two goals and 22 shots in 32 games.

How can the Sabres ignite their offense? They believe they simply need to stick with what they’ve been doing.

“We believe in what we’re doing in here, and eventually it’s going to turn for us,” Franson said.

Eichel added: “I think we’re going to wait for that game when we’re all going to break through and we’re going to get the bounces. We just got to stay consistent in our efforts.”

One thought on “Sabres still struggling to score goals”