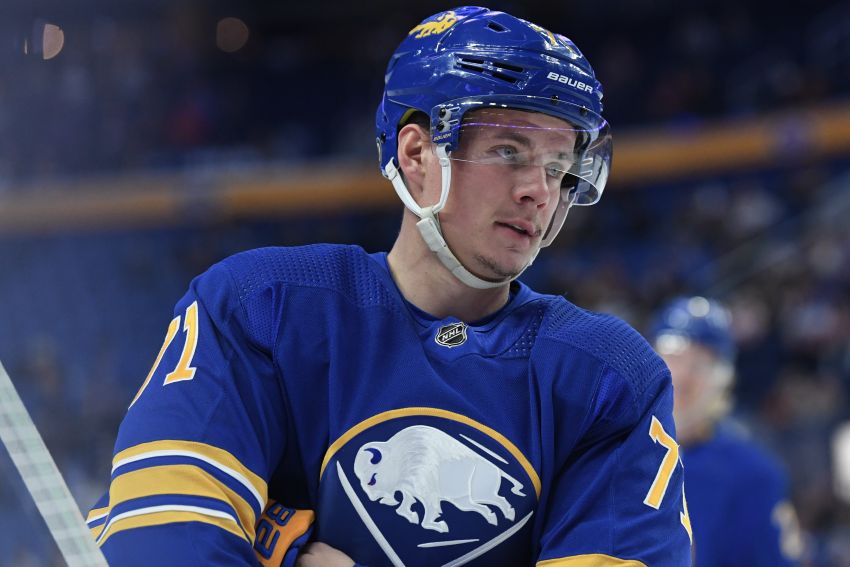 At the 7:39 mark, the Sabres led 2-0. The Kings, having won the previous afternoon, should’ve had less energy than the Sabres.

But Olofsson’s third goal and fifth point in the last three games was the Sabres’ final highlight of their 3-2 loss at the Staples Center. Carl Grundstrom scored one minute later, igniting the Kings.

The Sabres’ defense kept getting caught flat-footed and often looked lost around goalie Dustin Tokarski. The Sabres took three penalties in the third period. One led to Anze Kopitar’s tying goal. The other two came in the final six minutes, stymieing their chances of knotting the contest.

“Our D were challenged and struggled at times,” Sabres coach Don Granato said on a Zoom call. “For them, when you do play back-to-back, you’re in a rhythm and you’re in a flow. Especially when you come off a win, you’re on a high. We couldn’t get enough grind on them to wear them out. That’s usually what will happen when you’ve got a team that has to play six periods in a short span there.”

Sabres blew two leads in a short span, having frittered away a 3-0 advantage in Thursday’s 4-3 overtime win against the Anaheim Ducks.

“It’s not concerning in the sense of, you’re going to have to go through this stuff,” Granato said of what teams experience over a long season. “We played two home teams and we gave them a little bit to get into the game. Tonight … you give a team three power plays in the third period, the third one being we took ourselves out of some time to come back there.”

The Sabres made one lineup change Sunday, inserting rookie winger Brett Murray, who made his season debut, for John Hayden.

The 6-foot-5, 228-pound Murray began the season with the Rochester Americans before the Sabres recalled him to add forward depth.

“He took the two games that he played at the end of last year into his summer training,” Granato said. “He came into the summer with some hindsight of how big, strong, fast, efficient you need to be to play in the NHL, maybe with his skill set how he could impact the game in the NHL.

“And he was one guy that went to rookie camp and he was a force through camp because of his size and strength. Obviously, we gave first option to some older guys and that was the only reason he wasn’t in the lineup right away.”

Granato moved winger Jeff Skinner, who has scored just once this season, beside center Zemgus Girgensons and Kyle Okposo against the Kings. Skinner played most of the first seven games with Cozens and Vinnie Hinostroza.

“I’d like to put those three guys, three veteran guys, together,” Granato said. “I think Jeff has done some things really, really well and it just seemed like a fit to try. We didn’t obviously have a fire sale with lines. We just tweaked a few things.”

Notes: Tokarski looked strong against the Kings, making 31 saves. So far, Tokarski and Craig Anderson have combined to the give the Sabres one of the NHL’s best goalie tandems. “They’ve been great,” Granato said. … Cozens’ second-period fight with Brendan Lemieux was the Sabres’ first this season. … The Sabres scratched defenseman Christian Wolanin, who they claimed off waivers from the Kings, for the sixth straight game.