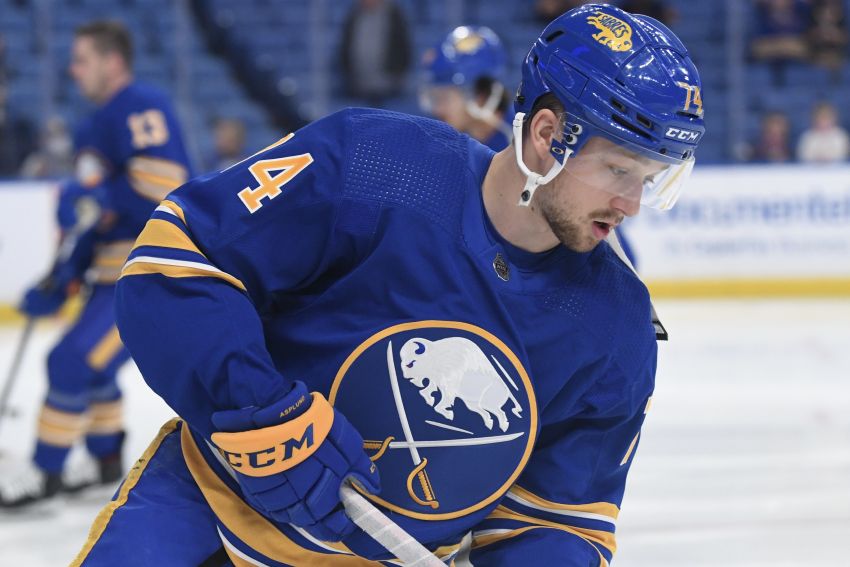 In the waning seconds of Thursday’s overtime, Buffalo Sabres winger Rasmus Asplund looked up ice, saw Victor Olofsson had room to maneuver at the blue line and fed his best friend a stretch pass.

As Asplund skated to the right circle, Olofsson cut left into the slot, splitting two Anaheim Ducks defenders before reaching the bottom of the left circle. The dizzying moves forced goalie Anthony Stolarz to overcommit, and as Olofsson fell to the ice, he fed Asplund for an easy game-winning goal at the net with 44 seconds remaining.

“That was all Ollie there,” Asplund said on a Zoom call following the Sabres’ 4-3 overtime win at Honda Center. “I was just on the back side of the net and then tapped it in. So it’s his goal. I was just happy to be able to finish it off for him there.”

The goal, Asplund’s second of the game, capped a wild night as the Sabres improved to 5-1-1 this season.

The Sabres escaped the first period up 1-0 thanks to 17 saves from goalie Craig Anderson. Barely six minutes into the second period, they led 3-0. Then the Ducks roared back, erasing the deficit by early in the third period.

“It was tough to watch at times because you’ve got guys just having a tough time executing,” Sabres coach Don Granato said. “But collectively they felt, ‘OK, we’re not up to our standard.’ They hunkered down, supported each other.”

Still, the Sabres, who mustered just one shot on Stolarz during the third period, remained calm and found a way to win.

“You don’t play, you don’t execute well, but you find a way to get two points,” Granato said. “You can’t diminish that and I won’t. It wasn’t pretty, but they stuck together as a team, they battled hard for each other, they supported each other and they found a way.”

The Sabres, of course, haven’t earned many wins like Thursday’s in recent years. But this new group has quickly meshed and become tight-knit.

“I really do think … with the leadership in that room, the guys have such a care factor that there’s a standard that they felt they weren’t achieving and they took it personal,” Granato said. “It’s their personal standard of not doing well enough and they just fought to survive, scratched and clawed through that. They never lost sight of winning.”

Asplund said: “Even if we’re down one or we’re up by three like today … we still try to manage the calm we have in the group and stick to our game and do what we do to make us successful.”

Center Zemgus Girgensons opened the scoring at 15:03 before Asplund’s first-career power-play goal 4:24 into the second period. Then center Arttu Ruotsalainen scored his first goal this season at 6:01.

In 2017 and 2018, Granato worked as an assistant under Joel Quenneville, who resigned as coach of the Florida Panthers on Thursday after meeting with NHL commissioner Gary Bettman about the Chicago Blackhawks’ sexual assault scandal.

A report commissioned by the Blackhawks found Quenneville and other team higher-ups did not respond quickly enough in 2010 to sexual assault allegations made by Kyle Beach, then a prospect in the organization, against Brad Aldrich, the team’s former video coach.

“My only thoughts are, obviously, for Kyle,” Granato said. “The whole situation, I really can’t think anything beyond that. I mean, I don’t know what that experience would be living that for so long.”