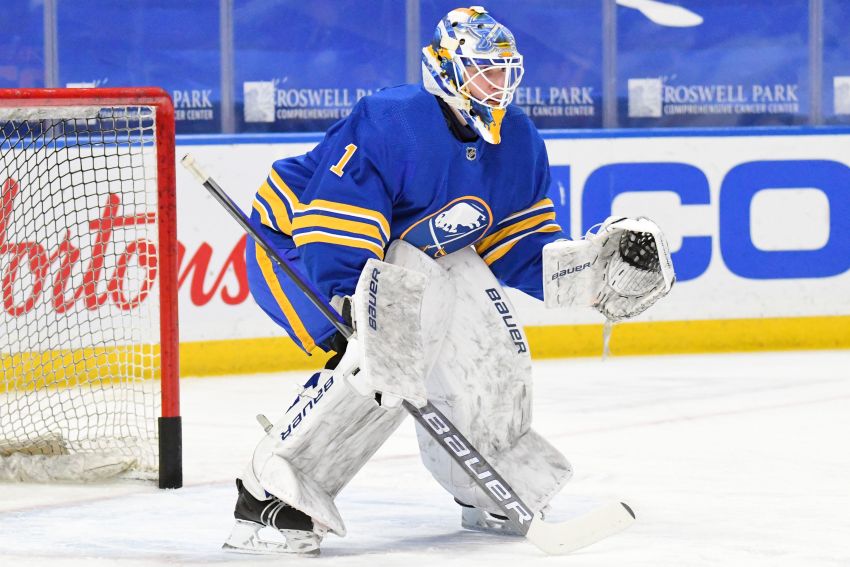 In the coming weeks or at the beginning of next season, he will likely return to Rochester, where he can carry the load for the Americans and keep developing.

Luukkonen looked terrific for most of his NHL debut, stopping 36 shots in Friday’s 6-4 win over the Boston Bruins. But he needs more seasoning. The Sabres’ top goalie prospect has played only 48 games in the minors, including just 25 in the AHL.

The position demands a long apprenticeship. It take years for goalies to hone the mental and physical aspects of their craft.

“It’s scary because they’re the last line of defense,” interim Sabres coach Don Granato said on a Zoom call Friday. “So it’s like everybody’s mistake before a goal happens is still going to fall on their plate if the goal happens. So they’re carrying a lot of burden and weight. And they’ve got to be able handle that, the psychology of that component.”

But right now, Luukkonen, 22, should stick with the Sabres. They have eight games left this season, starting with tonight’s road contest against the New York Rangers. The Finn should play at least five or six of them.

Goalies Carter Hutton and Linus Ullmark are injured. Dustin Tokarski has proven he can be a capable fill-in. The Sabres should ride the 6-foot-4, 220-pound Luukkonen over the final two weeks.

Granato has transformed the Sabres, the NHL’s laughingstock just a few weeks ago, into a solid team. Luukkonen has entered a stable situation in which he can thrive. Friday’s game prove that.

While the Bruins made a late push, the Sabres limited chances early, giving up just five shots in the first period. They allowed Luukkonen to settle in and get comfortable.

“It’s a lot easier for the defensemen and even the forwards to play in front of him when you know your goalie is confident in his abilities,” said Sabres defenseman Mattias Samuelsson, who played with Luukkonen in Rochester. “That showed tonight.”

The Sabres had Saturday off.