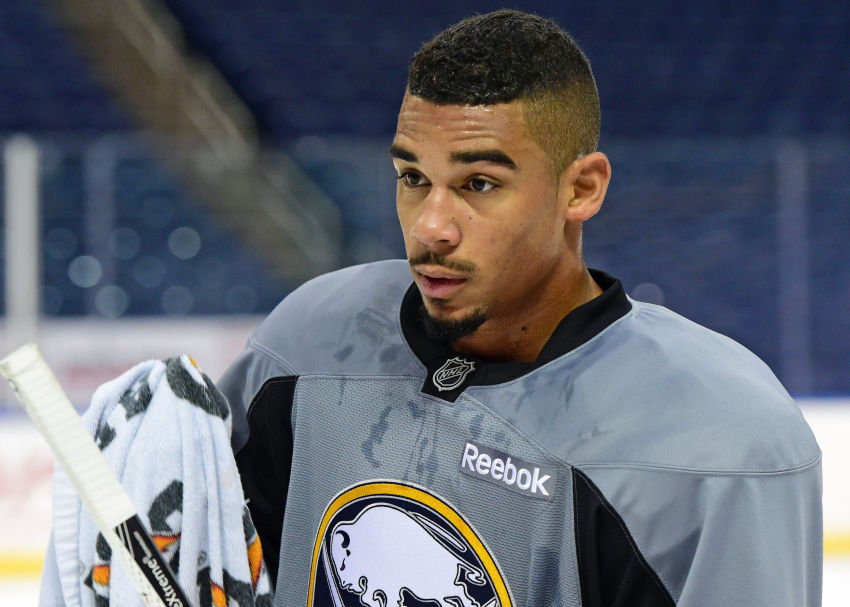 “I know some of the boys wanted to go, so I figured out some transportation,” Kane said this afternoon following practice inside the First Niagara Center.

That transportation turned out to be a helicopter. Yes, instead of driving up the QEW, Colaiacovo, Kane and winger Jamie McGinn flew to Toronto. Kane figured a helicopter would be safer than driving.

“It was too good of an opportunity to pass up,” a smiling Colaiacovo said. “It happened on short notice. It was a great gesture by him. It something that’s a once in a lifetime opportunity to do something like that. It was superstar status, that’s for sure.”

The three sat in box seats behind home plate for the Jays’ exciting 11-8 win against the Kansas City Royals. The electric atmosphere in the park wowed Colaiacovo.

“Unbelievable,” he said. “To get a chance to be a part of an event with that much on the line was outstanding. It was a great experience for me and something I’ll never forget.”

“For them to bring back those memories and put you in the moment in the year 2015 … I feel real pleasure to be able to take part in an opportunity like that,” he said. “It’s just great. It’s great for the city. It’s amazing to see how the city’s definitely rallied around the team.”

Kane also watched the Mets and Chicago Cubs play Sunday in New York on the Sabres’ day off.

In other news, defenseman Cody Franson practiced today after taking a maintenance day and said he plans to play Wednesday against the Toronto Maple Leafs, his old team.

“When you play in a place like that for a long time, you develop those relationships,” Franson said. “I really enjoyed my time in Toronto, but this is the next chapter for me. I’m having a lot of fun here, and I want to take two points from those guys.”