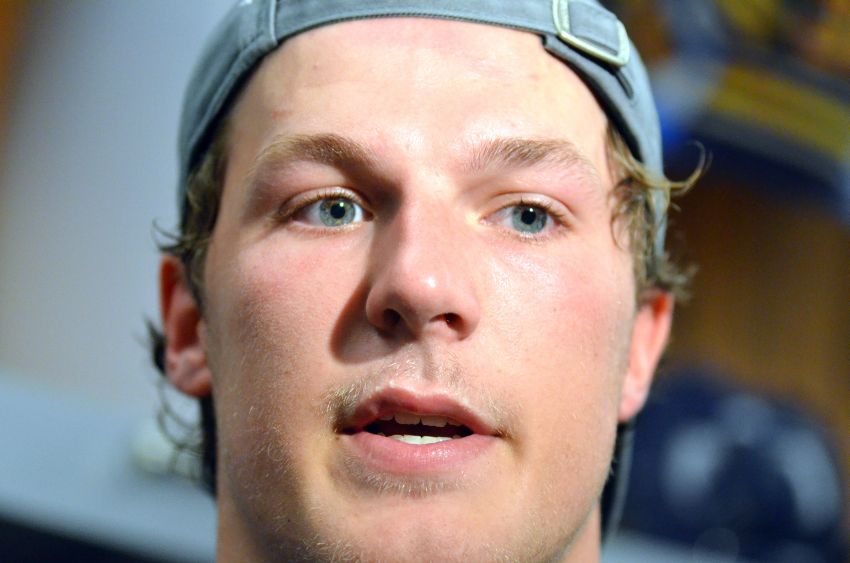 “Even out in the pregame skate, I’m sure my heart rate was getting up there, for sure,” the defenseman told reporters this afternoon in St. Louis. “This is a whole new level.”

Giving away his senior season, McCabe said, “was a big, big decision.” He said Wisconsin was an “all-around awesome experience” and he would tell other hockey players to go the college route.

McCabe called the past couple of days a “whirlwind.” He flew from Chicago to Buffalo and underwent some tests before going to St. Louis.

The Sabres have some stiff competition coming up. In addition to St. Louis, the Western Conference’s best team, they face Detroit on Friday, Philadelphia on Sunday and Detroit on Tuesday.

“The only way I’m looking at it is it’s exciting to get my feet wet a little bit and see what it takes to play up here at this level,” McCabe said.

What does Sabres coach Ted Nolan expect from McCabe?

“He’s going to be full of energy and full of enthusiasm,” he said. “We have to make sure, especially against the first team he plays against, St. Louis Blues, they’re the cream of the crop of the National Hockey League right now.

“So he can’t be admiring his passes. He can’t be going back on a normal college speed. He has to jump right in with the best in the league.”

Meanwhile, winger Chris Stewart, out since injuring his right ankle March 6, is practicing again and could return this season.

“He’s way ahead,” Nolan said. “We thought for sure he wouldn’t even be touching the ice until mid-summer. But it shows you the kind of rehab he’s been getting.”