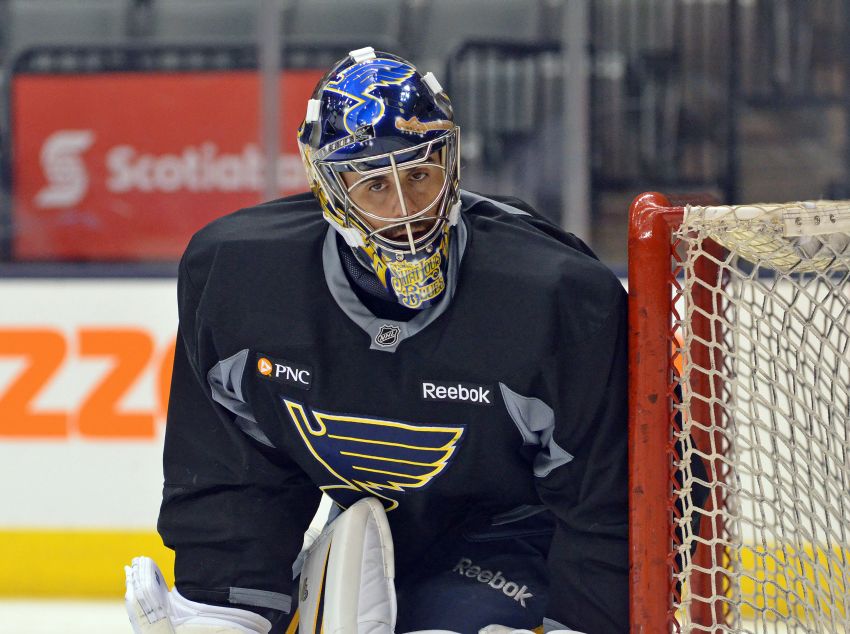 Sorry, Buffalo fans. Thirty-four days after the blockbuster trade between the Sabres and Blues, star goalie Ryan Miller has earned a well-deserved break tonight against his old club in St. Louis.

Of course, the Blues also have former captain Steve Ott, another key piece of the deal. Expect the agitating winger, who didn’t practice Wednesday, to have some fun and try to get under the Sabres’ skin.

“I hope none of the boys start trying to wake him up too much,” Miller told reporters Wednesday in St. Louis. “You know how he gets when he gets really awake. So I don’t think anybody’s going to try to give him too hard a time.

“But he likes to stir things up. I’m sure he’s going to be running his mouth a little bit and trying to get into guys. That’s how he has fun.”

Miller said he’s fine sitting against the he team left Feb. 28 after 12 years.

“I’m pretty fresh leaving that situation so maybe it’s just a nice little break, get Els in there,” he said. “He’s going to kick some pucks out. Hopefully, maybe see some of the boys for dinner or see them around the rink or something, catch up, see how they’re doing.”

Still, seeing his old friends is “going to be a little strange,” Miller said.

“Definitely, with the group of guys I played with a number of years, it’s going to be a little different,” he said. “But all great guys, all guys I count as friends. So I’m looking forward to seeing the human side of it. I’m actually excited some guys are going to be in town, a chance to see some friends.”

Miller played arguably his best game with the Blues on Tuesday, stopping 31 shots in a 1-0 shootout win against Philadelphia, his first shutout since March 21, 2012, a 101-game stretch.

“It was kind of a grind,” Miller said about the game. “It’s something where this team, they keep showing me they’re willing to grind and play hard in the corners. I got to show them I could grind out a game, too. It’s part of our ongoing relationship. We kind of build a relationship with the boys in here. I got to show I can play the type of game they need some nights.”

Notes: The Sabres had Wednesday off. … Former Sabres defenseman Jordan Leopold (ankle) is expected to play his first game since Feb. 8 for the Blues. … Sabres coach Ted Nolan on seeing Miller and Ott: “They’re on a very good team right now and a type of team that we want to build into. So it’ll be good to see those two guys and play against them.”