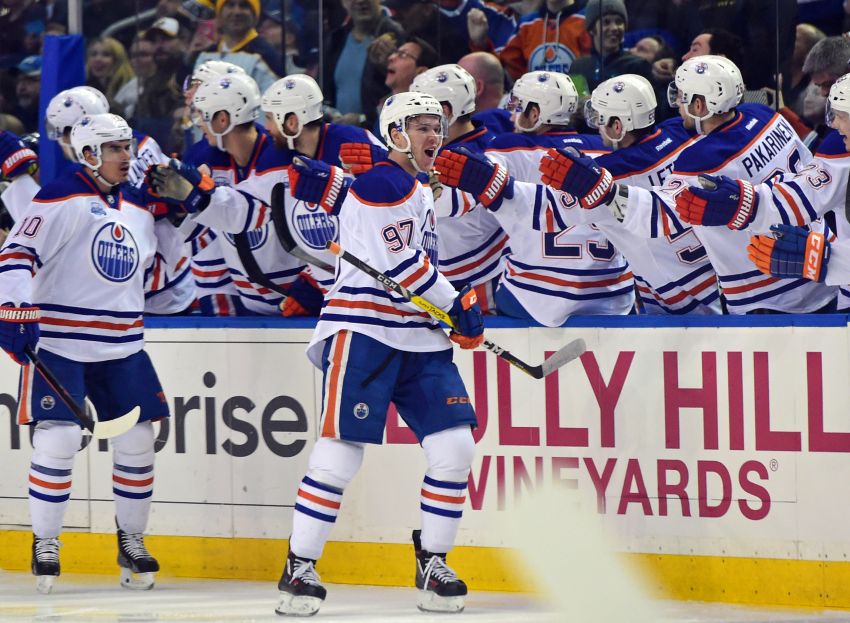 BUFFALO – As much as Jack Eichel and Connor McDavid tried to downplay the hype, say that Tuesday’s first-ever meeting between the top two picks was really about their teams, in the end, the rookies ended up being the talk of the Edmonton Oilers’ 2-1 overtime triumph against the Sabres.

The game almost played out like it had been scripted, with McDavid, the phenom Sabres fans coveted before the Oilers won the NHL Draft Lottery last year, scoring the slick winner with 1:12 left, his second goal of the night.

That he scored seconds after Eichel nearly won it made the ending even more dramatic.

When McDavid, who scored 22 seconds into the game, saw Eichel’s nifty backhand go wide after he nearly undressed a defender, he had one thought: “Better get back.”

“He had a lot of speed and made a nice move there too,” McDavid said.

McDavid got back, grabbed the carom near his own circle and zoomed down the right wing before beating Sabres defenseman Rasmus Ristolainen and goalie Robin Lehner.

While Eichel added another highlight to his reel, Eichel looked sullen as he lamented his missed opportunity.

“(Josh Gorges) makes a good outlet pass to me in overtime,” he said. “I should’ve just kept going on my forehand, take it to the net. Tough bounce.”

What happened on the play?

“There’s eight guys on the ice, so it’s a team game,” Eichel said.

Eichel might’ve gone home unhappy, but the capacity crowd of 19,070 fans inside the First Niagara Center essentially got exactly what they wanted. For them, Tuesday was all about the centers dubbed generation talents.

Games between two bottom-feeders – the Oilers began the night 30th overall and the Sabres 26th – rarely generated so much buzz.

After McDavid capitalized on Sabres defenseman Zach Bogosian’s miscue and backhanded a shot by Lehner before many fans had found their seats, the crowd booed him mercilessly.

“I know I’m definitely excited to get out of Buffalo and move on to the next game,” McDavid said.

A few minutes later, when Eichel won a defensive-zone draw from McDavid cleanly, the fans inside cheered.

The Sabres mostly played sloppy throughout their second straight loss and fourth in five games.

“We didn’t play well at all,” Eichel said. “It started with the way we came out.”

Lehner bailed them out, making 39 saves, including five in overtime.

“We weren’t executing,” Bogosian said. “They’re a pretty skilled, fast group, so if you give them the puck, they’re going to make plays.”

He added: “No matter how many opportunities we get, we can’t rely on Robin to keep us in games like that.”

Former Sabres defenseman Andrej Sekera appeared to make it 2-0 with just under a second left in the second period. But the Sabres challenged, and Anton Lander was ruled offside, negating the goal.

Then Cal O’Reilly, who was recalled earlier in the day in a paper move, tied 9:06 into the third period, converting Sam Reinhart’s pass.

“It was a good feeling, short-lived here, obviously, not getting the win,” O’Reilly said. “But it was nice to contribute a little bit.”