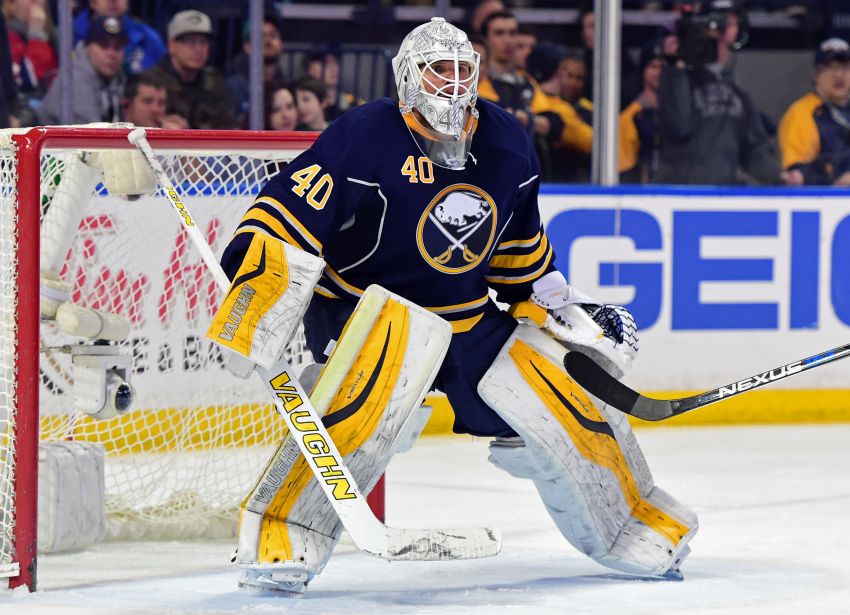 Sure, a few are taller than the Sabres’ new starter. Tampa Bay’s Ben Bishop, for example, is 6-foot-7 but weighs 31 fewer pounds than his former AHL teammate.

Lehner, of course, looks huge in his net. But so do a lot of other goalies much smaller than the Swede.

“There’s guys out there that weigh 160 pounds (who are) not that tall who look bigger than me, and … I’m probably one of the biggest-framed guys in the league,” Lehner said Wednesday prior to the Sabres’ 3-2 overtime loss to the Montreal Canadiens. “I have pictures with me and a lot of the other goalies. It’s not much difference.”

Former goalie Kay Whitmore, the NHL’s senior director of hockey operations, told the GMs at their annual meetings in Florida how the chest, upper body and pants areas of goalies can be streamlined without compromising safety, according to Yahoo! Sports.

“The question was asked today, ‘Well, what’s different this time around?’” Whitmore told reporters. “Well, we are attacking it together. You are hearing from some of the best goalies in the game and they think this is what is right. They want a level playing field within their ranks.”

Whitmore, according to Yahoo!, said new the new equipment will be “cutting away all the fat, the parts that extend out past the body and don’t wrap.”

Lehner isn’t alone in his support. Washington’s Braden Holtby and New Jersey’s Cory Schneider, two of the NHL’s best goalies, like the idea of smaller equipment. So does the NHL Players’ Association.

With scoring so low this season – teams have averaged a paltry 5.4 goals a game – the NHL hopes the smaller equipment will create more goals.

“I don’t think it’s going to affect the goal scoring that much,” Lehner said. “I might be wrong, but it might go even the other way.”

Why does Lehner believe scoring could go down? He said with the athleticism goalies possess, they’ll move better with less equipment.

“They’re going to have less weight and padding on them,” he said. “Goaltenders translate or adjust all the time. It’s not like back in the day, either. We watch so much video. We work with our goalie coaches every day. We’re on the ice before the practice, after practice. There’s a lot more things to the goalie position now, and I don’t think making the pads smaller necessarily is going to (increase) scoring.”

Lehner also thinks goalies and equipment staff will tinker with the new protection.

Whitmore wants the new equipment ready for the summer.

Despite a 19-game goal drought, Sabres coach Dan Bylsma put Zemgus Girgensons back beside center Jack Eichel on Wednesday and also gave the struggling winger a prime spot on the power play.

Girgensons showcased some chemistry with Eichel earlier in the winter.

After scoring 15 goals in 61 games last season, the Girgensons has mustered only five goals in 60 contests this year. He has two scores in his last 27 appearances.

“Yeah, definitely,” he said. “I think everyone would (be). I mean, nothing wrong with that. That’s something that you go through and you just learn.”

Bylsma said before winger Tyler Ennis suffered a concussion Dec. 30, he wanted reunite him with Girgensons and Matt Moulson to reform the Sabres’ best line from last season.

“That was really (a line) in the offensive zone with speed, with Zemgus being able to get his shot off from the (slot) area and scoring goals, and that’s not something we’ve replicated,” Bylsma said. “He had one in preseason that looked like that’s where he’s going to be at and show he could do it. We haven’t been there for a big portion of the season.

“One of the big reasons of getting him on the inside on the power play is to get him back into that area in that position, one where he’s been successful in the past and really where he needs to be in the future.”

With center Ryan O’Reilly back from a broken foot, the Sabres sent winger Dan Catenacci to the AHL following the morning skate. The rookie has zero points in 10 NHL games this season.