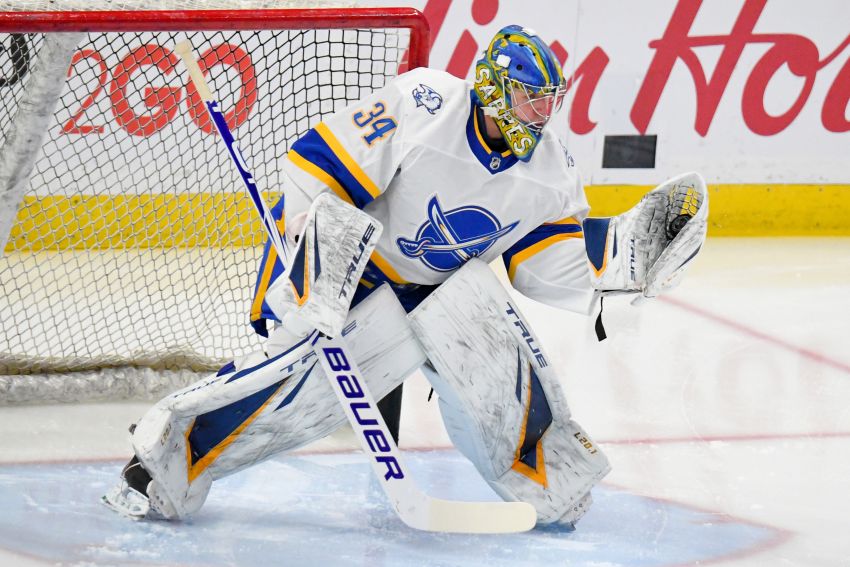 BUFFALO – When the Sabres signed minor league goalie Michael Houser to a one-year, $700,000 contract Friday, it ignited speculation they had another move in the works.

Sure enough, when the Sabres convened for Friday’s practice inside KeyBank Center, goalie Jonas Johansson was absent.

The Sabres are close to trading Johansson, according to The Buffalo News. The Swede would likely be dealt to the Colorado Avalanche, NHL Network analyst Kevin Weekes reported.

But the Sabres’ uncertain status has held up the deal, according to The News. The NHL postponed this afternoon’s game against Boston because four Bruins players who played in Thursday’s 4-1 win here were added to the COVID-19 protocol-related absences list. They have five total players on the list.

If any Sabres are put in protocol, the league could postpone more games.

The Sabres gave the 6-foot-5, 220-pound Johansson a brief look last week, awarding him three consecutive starts so he could experience a heavy workload. He posted a 3.93 goals-against average and an .864 save percentage in three losses.

Shortly after signing Houser, 28, the Sabres placed him on waivers, a standard procedure when a player who had an AHL contract inks an NHL deal. Houser has served as Ukko-Pekka Luukkonen’s backup with the Rochester Americans this season, playing zero games.

The 6-foot-2, 192-pound Houser spent the previous three seasons with the Cincinnati Cyclones, the Sabres’ ECHL affiliate. He attended Buffalo’s summer development camp about 10 years ago.

With No. 1 goalie Linus Ullmark injured and Johansson held out, the Sabres practiced Friday with Carter Hutton and Dustin Tokarski, their taxi-squad netminder.