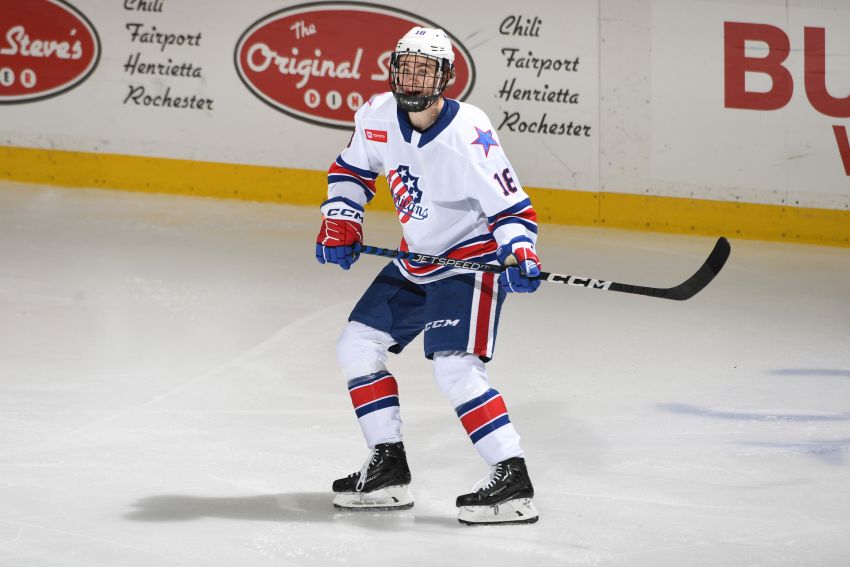 Isak Rosen has spent this season in Rochester. ©2022, Micheline Veluvolu

The Buffalo Sabres on Monday reassigned three of their top forward prospects – Jiri Kulich, Noah Ostlund and Isak Rosen – to their respective national teams for the upcoming World Junior Championship.

Kulich (Czech Republic) and Rosen (Sweden) have spent their first season in North America with the Rochester Americans, while Ostlund (Sweden) has played for Djurgardens, a pro team in HockeyAllsvenskan.

Kulich, 18, has scored six goals and 16 points in 24 games as a rookie with the Amerks. The Sabres drafted him 28th overall this year.

Rosen, 19 has registered three goals and 15 points in 25 contests for the Amerks. The Sabres drafted him 14th overall in 2021.

He played in the most recent World Junior tournament in August, registering four goals and five points in seven contests as Sweden earned a bronze medal.

Ostlund, 18, has recorded two goals and 11 points in 19 games with Djurgardens. The Sabres drafted him 16th overall this year.

Halifax, Nova Scotia, and Moncton, New Brunswick, are hosting the tournament, which begins next Monday.

With Ilya Lyubushkin ready to return from a lower-body injury that sidelined him nine games, the Sabres on Monday sent defenseman Jeremy Davies back to the Amerks.

Davies, 26, played in Saturday’s 5-2 road win over the Arizona Coyotes, his first NHL appearance this season.