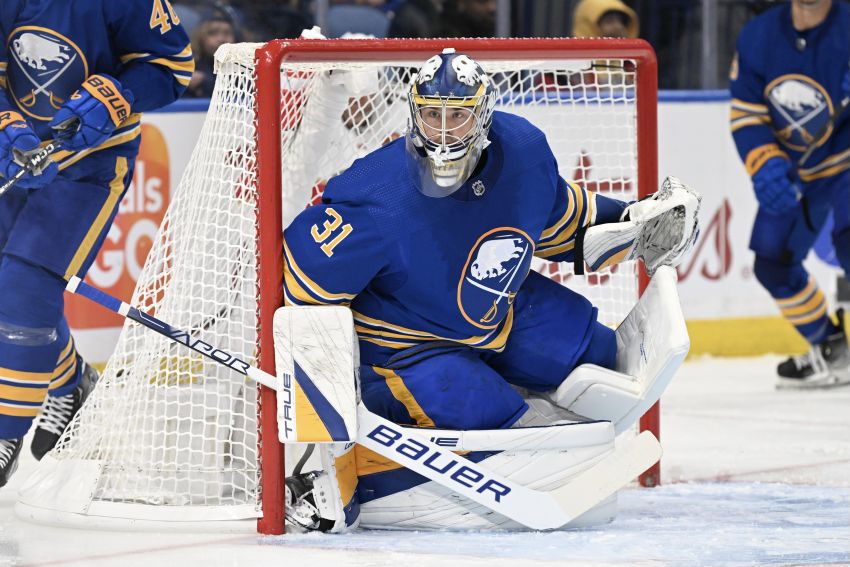 BUFFALO – When Sabres defenseman Rasmus Dahlin checked Senators forward Mathieu Joseph into Eric Comrie five weeks ago, the goalie said he felt “a little bit of a pop in my knee.”

Right away, Comrie, 27, knew something wasn’t right. Still, he tried to gut out the lower-body injury. Craig Anderson had started a night earlier, and he didn’t want to make the veteran play back-to-back games.

Comrie said he tested his knee by doing the butterfly motion.

Even after the Senators scored on their next shot, Comrie wanted to keep going.

Comrie, who started 11 of the Sabres’ first 17 games, appears close to returning. While he has no firm timetable – “I have no clue,” he said – he’s “pretty much right there, pretty much 100 percent.”

“It’s just about getting used to playing hockey again,” he said. “It’s tough when you take four weeks off. I haven’t taken four weeks off since COVID, really, just because I don’t really take much time off in the summer.”

Comrie was one of three goalies on the ice for Wednesday’s practice at LECOM Harborcenter. Anderson and Ukko-Pekka Luukkonen, who has been handling most of the action in Comrie’s absence, also participated.

General manager Kevyn Adams said on Wednesday the Sabres will look at possibly carrying three goalies on the roster.

Comrie, who has missed 15 games, said if the Sabres ask, he would accept a conditioning assignment to the Rochester Americans.

In other injury news, defenseman Jacob Bryson and Owen Power are progressing from their lower-body injuries, according to the Sabres. The team, however, has no timetable for their return. Bryson practiced Wednesday.