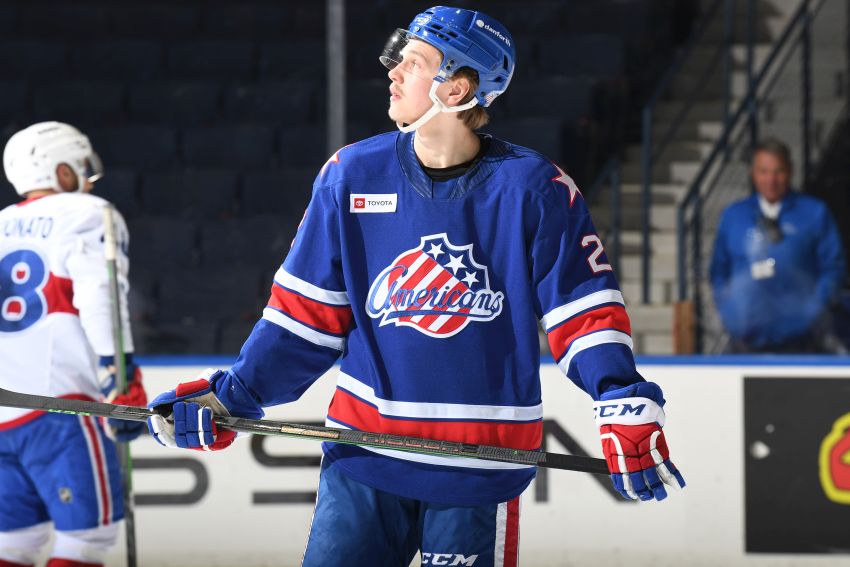 When the Calder Cup Playoffs began, Laaksonen, a regular for the Americans all season, sat out the first eight games as a healthy scratch, watching until Game 2 of the North Division final.

But a not-so-subtle message accompanied the Finn’s surprising benching: you’re too one-dimensional. For example, he registered four of his five goals and 23 of his 29 assists on the power play.

“It’s been two years and he’s gotten so much better, and he’s done so many good things offensively,” Amerks coach Seth Appert said prior to last Wednesday’s 6-5, season-ending triple overtime loss. “But his defensive game has to continue to improve, his commitment to defending and playing with the physical style. He’s never going to be a physical defenseman, but in North America, you have to physically engage to defend.”

The postseason, of course, is a much more intense, grittier brand of hockey than the regular season. Appert said the Amerks’ first round-opponent, the Belleville Senators, were “violet.” He said the second team they knocked off, the Utica Comets, played “heavy.”

“So those are even harder matchups for a young, smaller defenseman,” Appert said inside Blue Cross Arena.

So Laaksonen kept sitting out, even when the Amerks started utilizing seven defensemen against Utica. Defensemen on AHL contracts like Mitch Eliot and Peter Tischke played over him.

Finally, one game into the AHL North Division final against the Laval Rocket – “More speed and tenacity than violence,” Appert said of Laval’s style – Laaksonen played again. He skated sparingly as the seventh defenseman over the final two contests, mostly playing on the power play.

Laaksonen, who spent time on the Sabres’ taxi squad during the winter, understands he must evolve if he wants to develop into an NHL talent.

“I know I have the offensive tools on the power play and with the puck I can do stuff but I’ve just go to focus on being more dialed in the D-zone and just get more bigger and stronger,” Laaksonen said.

He added: “It’s a tough league … and it’s physical, and especially our division is a really, really physical division. So for me, that’s a challenge.”

The AHL is a development league, and by the end of the season, Laaksonen and Casey Fitzgerald, who had just returned from a long stint in Buffalo, were the only two prospects on Rochester’s blue line.

Why not just play Laaksonen and let him learn firsthand on the ice?

“We talk about development all the time,” Appert said. “There’s accountability that has to be part of development and sometimes the best thing for development is sitting and watching. You don’t want to do it all the time and it can never be to put him in a negative spot, but from a teaching standpoint on the urgency of the things that you need to get better at, sometimes those things are necessary, and I thought he came back with a lot of purpose.”