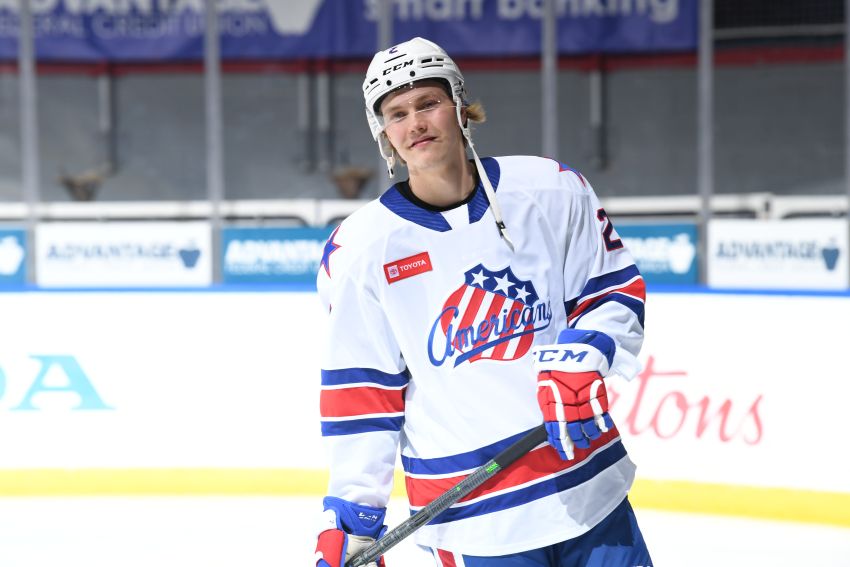 Oskari Laaksonen’s start this season, the defenseman and his coach acknowledged, wasn’t very good. The Sabres prospect struggled during his time in Buffalo, failing to make an impact in rookie camp or the preseason.

When Laaksonen returned to the Rochester Americans to begin his second AHL season – he played just one NHL exhibition game – it took him a bit to get going.

“My first couple games were not at the level I want to play, and now I think I’m getting a little confidence, especially during the past week,” Laaksonen said on a Zoom call following Monday’s practice in Rochester.

“This last week was his best hockey of the year so far,” said coach Seth Appert, whose Amerks host the Belleville Senators tonight at Blue Cross Arena. “I don’t think he had his best games early, whether at training camp or in the first couple games of the year. I think his confidence is growing right now.”

Laaksonen’s confidence is burgeoning, in part, because Appert realized he needed to coach him a bit differently.

At his best, Laaksonen creates offense, most notably quarterbacking the power play. He stood out as a rookie last season, recording 17 points in 28 games and earning a spot on the North Division All-Star Team. His 15 assists led the Amerks.

Still, the Finn is raw. To crack the NHL, he must evolve into a better defender the Sabres can utilize at even strength. Right now, he is too one-dimensional.

But in trying to help Laaksonen transform his game, Appert said he “was taking things away from him that he has a lot of pride in.” So Appert corrected his approach.

“He’s kind of taken off and ran a little bit (since then),” he said. “He gains a lot of confidence from his offensive play. And right now, he’s transitioning his play.”

“He’s getting there,” he said. “He needs to keep growing defensively, because the top two things you need to do as a defenseman to play and be great in this league or play in the NHL, is you need to end plays and you need to start plays. You can break it down as simple as that, can you end a play? … He has shown growth in that but he got to keep growing.

“Can you shut down a line rush with your gapping? Can you end a play in the defensive zone in the corner, by getting a defensive-zone stall, getting somebody into the glass, having a good stick? And then can you start a play and get us on offense? He’s really good at starting plays and he’s grown a ton at that. And we got to keep working with him about getting better at ending plays.”

Laaksonen, a third-round pick in 2017, 89th overall, understands his maturation will take time. Beginning shortly after his 18th birthday, he spent parts of four seasons in Liiga, Finland’s top pro circuit. He has plenty of experience competing against men.

Tonight’s game, however, will be just his 35th appearance in North America.

“I need to be a trusted two-way defenseman if I want to make it to the NHL,” Laaksonen said. “It’s a process; it’s a marathon, it’s not a race, that’s what I’ve always been saying. So there’s a lot of time left and there’s a lot of work to be done.”

Laaksonen said he spent the summer working on becoming more physical – he’s listed about seven pounds heavier this season – and enhancing his play in the defensive zone.

“I know I can bring offense to this league,” he said. “And, obviously, on power play, me and Quinny and all the power play has been clicking really well. It’s been nice to be a part of that. I just try to work on the defense side so I can produce in the O-zone.”

JJ Peterka is on another level.