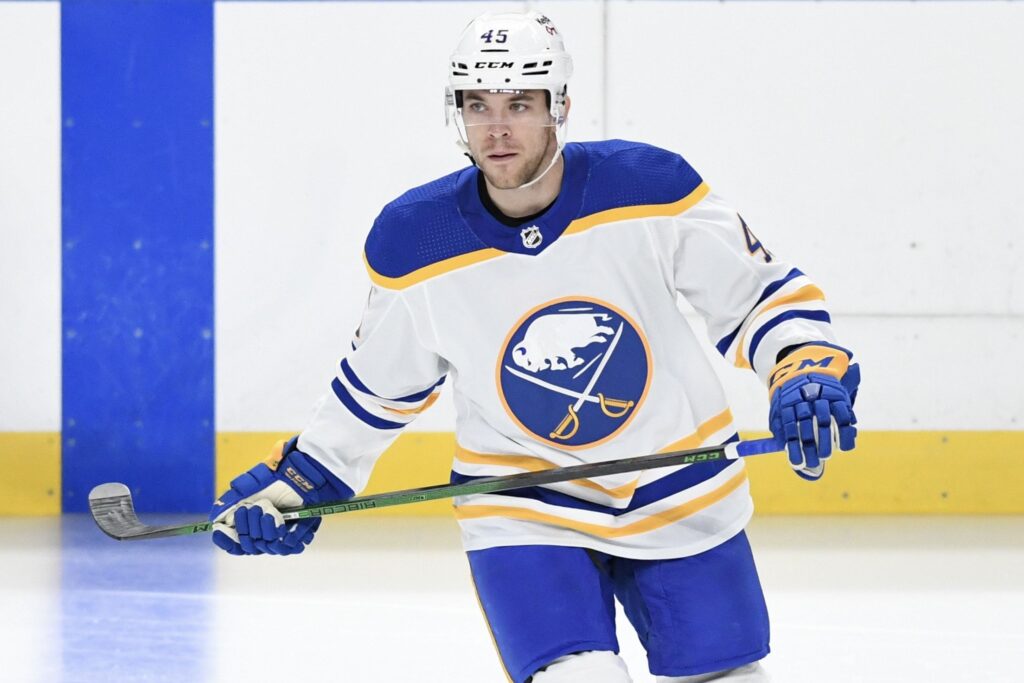 BUFFALO – By the end of that night in Vegas, every member of the Golden Knights knew when Sabres rookie Casey Fitzgerald, the undersized defenseman playing just his seventh NHL game, was on the ice.

“And they didn’t like it,” Sabres coach Don Granato said following Saturday’s practice at LECOM Harborcenter. “It was the better players, that was the beauty of it. We can play him against better players and they’re looking over their shoulder and they’re chirping all the way back to the bench, so they’re preoccupied with him and he feeds on that. He just goes right back at the guy.”

In his short time in the NHL, the 5-foot-11, 188-pound Fitzgerald, 24, has established himself as an aggressive agitator unafraid to take on bigger and more established talent.

“He brings something to our group just beyond a defenseman: his bite, his grit,” Granato said. “There’s not many guys his size in the NHL that want to actually make eye contact with him when he’s gritty. And that’s impactful in a game.

Fitzgerald fought in his big league debut Dec. 17. In the Sabres’ 5-2 loss to the Golden Knights on Feb. 1, he and Max Pacioretty went at each other all night.

In the first period, after Pacioretty hit Sabres defenseman Jacob Bryson into the boards from behind, they nearly scrapped. About midway through the third period, following another encounter, both players received 10-minute misconducts.

“I’m not a guy that’s going to go and play cheap but I play hard,” Fitzgerald said. “I’ll finish every check and get in your face. If that upsets the other team, I’m doing my job. It’s been kind of a component of my game that I’ve been trying to endorse here and trying to pick up as a season goes on and continue with that.”

Clearly, Fitzgerald’s ferocious style has been catching opponents by surprise during his first trip around the league.

“I don’t think anyone knows who I am, so that’s probably why,” Fitzgerald said. “That’s why for me, it’s just letting them know who I am. It’s kind of what I’ve been trying to do is stay up here, you only get so many chances. So I’m trying to take the most out of it and do what I can with it.”

Granato knows Fitzgerald well, having coached him in junior at the U.S. National Team Development Program. Granato likes the gritty element Fitzgerald offers so much he has recently awarded him regular duty.

The American will likely play his fifth straight game this afternoon in Montreal against the hapless Canadiens.

“We need that bite, that grit, that competitiveness, passion,” Granato said. “… And it’s real, it’s authentic. I’ve seen him since he was 16 and he’s a tough, competitive guy.”

Of course, Fitzgerald, a third-year pro, doesn’t want to become too comfortable. He has spent most of the season with the Rochester Americans, compiling four goals, nine points and 43 penalty minutes in 27 games.

After a long look during training camp, it appeared Fitzgerald would likely earn his first NHL action this season. Injuries have helped create an opportunity for him. Right now, defensemen Will Butcher (lower) and Colin Miller (upper) are sidelined.

Still, Fitzgerald stayed in the lineup for Thursday’s 4-3 overtime loss to the Columbus Blue Jackets. The Sabres, who had been forced to dress seven defensemen prior to the NHL All-Star break, used six again. Fitzgerald pushed out Bryson, who has been a regular since last season.

Fitzgerald, a right-handed shot, allows the Sabres to balance their blue line with a righty and lefty on each pairing. On Thursday, Fitzgerald skated a career-high 20 minutes, 48 seconds.

“It’s good to see that they’re starting to trust me a little more and I’m starting to kind of sync into my game,” Fitzgerald said of his regular action. “But still, every day I tell myself I got to prove myself out there because nothing’s guaranteed. Tomorrow I don’t know where I’m going to be, so nothing’s guaranteed. So that’s kind of the mentality I’ve been having, just keep trying to prove myself.”

Granato said the next step in Fitzgerald’s maturation is “getting acclimated now to the size, strength and speed of the league.”

“That’s the only thing he hasn’t had, is repetition at that,” he said. “But I love the way he engages. He’s fierce, he’s competitive. Those are attributes that add to our group.”

Mittelstadt has experienced a nagging problem after undergoing surgery to repair an upper-body injury in early December. He hasn’t played since Jan. 30.

“We’ll wait a couple more days and see how he is, see how he responds,” Granato said. “I mean, he looks good. His timing’s not there. He’s practiced hard. He looks better than he did yesterday even in practice. But I don’t think it’s fair or appropriate to put him in right now.”

Quebec’s COVID-19 restrictions will limit attendance at today’s game to just 500 fans. This will be the third contest the Sabres have recently played before a tiny crowd or in front of zero fans. They had two last month in Ottawa.

“It’s a hollow feeling, it really is,” Granato said of playing in an empty rink. “After puck drop, you get into it. But it does take a few minutes, I think, for the players to get into it. It’s just different noises and echoes. The competition, competitiveness hops in really quick, and that’s all gone, the fact that there’s not people in the building. So the guys, I think, play every bit as hard.

“Now, when there’s 18,000 people in the building, there’s more emotional swings. Goals against and mistakes can be amplified emotionally, and you don’t typically have that in those buildings that are empty.”

This afternoon’s game will be first time the Sabres face the Canadiens under new interim coach Martin St. Louis, who took over Wednesday.

St. Louis, a Hall of Famer known for his days with the Tampa Bay Lightning, had no previous coaching experience.

The Canadiens have lost nine straight games for the first time since 1939-40.