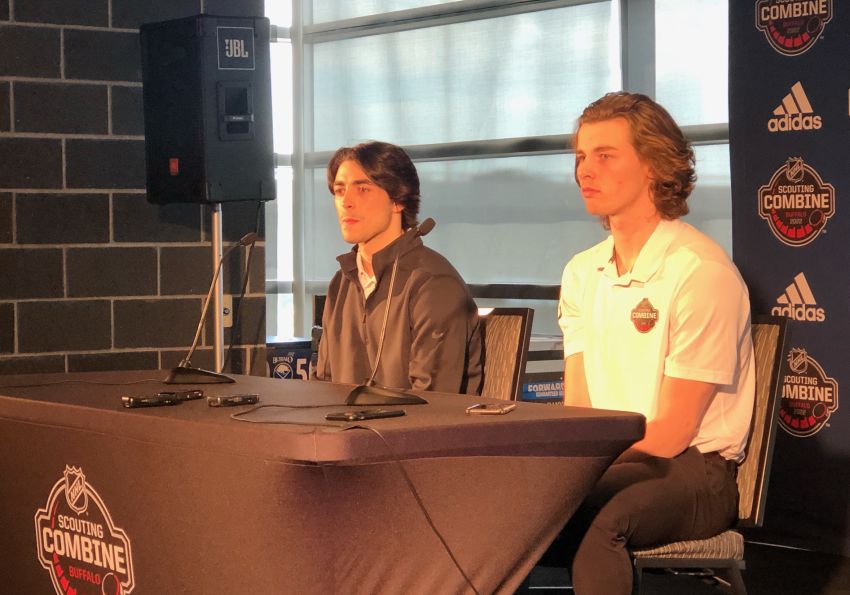 BUFFALO – Center Conor Geekie, an NHL Draft prospect the Sabres could be interested in taking ninth or 16th overall, hails from the tiny prairie town of Strathclair, Manitoba, population 709.

Well, that number from the 2016 Canadian Census is a little misleading. It includes the population of the surrounding area. Strathclair proper is much smaller.

“Um, 137, I think,” Geekie replied Friday when asked how many people live in his hometown. “Just in the town. The municipality’s got quite a bit more.”

When Geekie, NHL Central Scouting’s fifth-ranked North American skater, spoke to teams this week, he wanted them to know the effort he put forward to make it out of Strathclair and develop into a coveted prospect.

Geekie, 18, has beaten long odds to become a star for the Western Hockey League’s Winnipeg Ice, and he’s darn proud of it.

“Coming out of a small town, I don’t get much exposure to, I guess you could say, some things,” Geekie said inside LECOM Harborcenter, where draft prospects will undergo fitness testing today. “Growing up, playing with seven girls, three boys on my team, I think that’s something that really comes to heart, trying to put my place on the map as much as I can.

“It’s something I’ve worked hard for a lot. My motivation is endless, and I think it’s always been a dream of mine.”

It’s a dream the 6-foot-3, 196-pound Geekie understands can materialize. His brother, Morgan, is a forward with the Seattle Kraken.

Geekie said teams wanted to know the influence Morgan, who began his career with the Carolina Hurricanes, has had on his younger brother.

“Super proud of him, getting to go to Seattle, starting fresh,” Geekie said. “I think that was probably the main thing.”

Geekie said when executives learned just how small Strathclair is, “most of them got a good chuckle out of that.”

“I wouldn’t say there was too many challenges when it came to the game of hockey, per se,” he said. “I was lucky enough to have a key to the rink in town.”

That’s right. Because his father, Craig, who also played in the WHL, was on the board of Strathclair Arena, he could basically come and go as he pleased.

The opportunity to skate so often – the rink is just a few blocks from his house – buoyed his career.

“It wasn’t the nicest rink in town, don’t get me wrong,” Geekie said. “There’s probably some cattle in there right now. But I think for the most part, that almost made me better, I think the creativity going out there with Morgan and Noah (another brother), just playing shinny with my buddies.”

As a rookie in 2020-21, Geekie compiled nine goals and 23 points in 24 outings – the WHL played a truncated schedule in a bubble – and learned how to be a pro from Sabres center Peyton Krebs.

“One of the hardest-working players I’ve ever played with,” Geekie said. “Super great guy, super nice to be around, cracks a good joke once in a while, too. So I think kind of more how he carried himself is something I picked up on, how hard he worked.”

Even with Krebs gone, the Ice, who are coached by ex-Sabres defenseman James Patrick, fielded a special team in 2021-22, reaching the third round of the playoffs. Geekie morphed into a star, scoring 24 goals and 70 points in 63 games.

“The way that Geeks possesses the puck, can control the game,” said center Matthew Savoie, Central Scouting’s fourth-rated prospect and Winnipeg’s leading scorer. “He’s obviously a big, strong guy, likes to have the puck on his stick. He’s a dynamic player out there.”

“The way he possesses the puck, his vision, his IQ,” he said. “I think that’s something I really try to incorporate.”

Geekie’s ability to process the game on such a high level helps make him such an elite prospect.