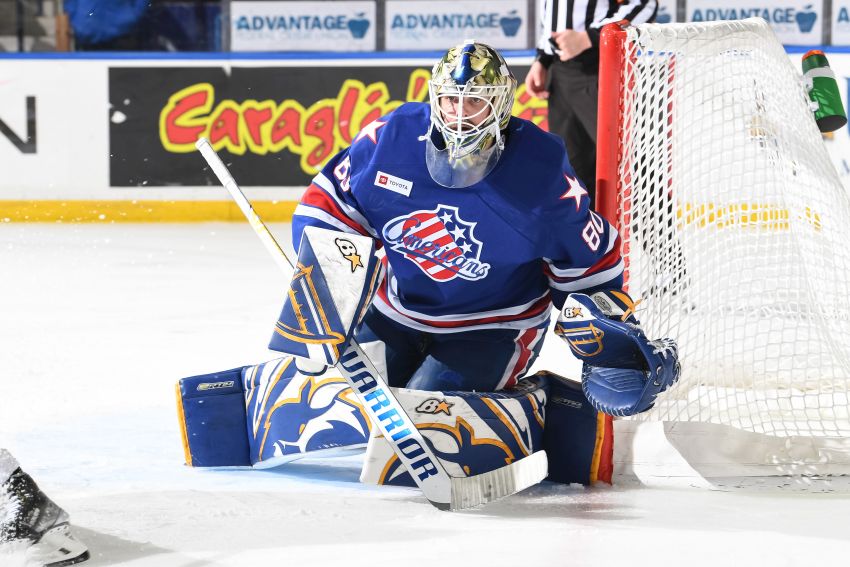 ROCHESTER – Goalie Aaron Dell arrived in Buffalo nine months ago as perhaps the favorite to win the Sabres’ backup job before enduring a miserable preseason and getting waived.

When an opportunity materialized to play in the NHL a month later, Dell struggled so badly the Sabres acquired another netminder and demoted him to the AHL again.

Still, after a lost season in which he played just eight times, Dell enjoyed a bit of a bounce-back campaign in 2021-22, playing 44 total games and backstopping the Americans throughout their run to the AHL North Division final.

“I kind of had to refind my game again this year,” Dell said after making a career-high 54 saves in last Wednesday’s season-ending, 6-5 triple overtime loss to the Laval Rocket. “Getting to play was great for that. You can practice for that, but nothing really compares to that mentality. So you got to get that game experience back to find out where you’re at.”

While Dell blew his chances in Buffalo – they waived him again after he earned a three-game suspension for hitting Ottawa Senators forward Drake Batherson on Jan. 25 – he performed well in first regular AHL action since 2015-16.

Dell played 22 regular-season games for Amerks, registering a 12-7-1 record with a 2.91 goals-against average and a .909 save percentage. He started all 10 postseason contests subbing for injured prospect Ukko-Pekka Luukkonen, becoming a mainstay during the Amerks’ deepest Calder Cup Playoff run since 2004.

After a rough go in Buffalo, Dell, who signed a one-year, two-way contract last year, settled in and enjoyed the final four months of the season in Rochester.

“We have such a great group here,” Dell said inside Blue Cross Arena. “It was fun to be here every day. I think that’s a big part of it. I think when you’re excited to be here, you come in, you do your work and you don’t want to let the guys down. So you have to be at your best. You expect the same out of everybody else. When you care about each other, you do it not for yourself but to not let anybody else down.”

If the Amerks had extended the best-of-five series against Laval, Appert said Luukkonen, who was recovering from a hamstring injury, would’ve started Game 4.

“That’s no knock on Aaron Dell,” Appert said on an end-of-season Zoom call Friday. “I thought Aaron Dell was fantastic for us this year. … Kevyn (Adams) and Jason (Karmanos) have given me very clear marching orders at what we need to do here and winning’s part of it, but getting our young guys ready to be impact players in Buffalo is a bigger part of it.”

If Luukkonen, 23, doesn’t graduate to Buffalo next season, he will earn the bulk of the starts for the Amerks. Even if the Finn moves up, the Sabres must add goaltending depth this offseason and find a veteran to play games in the AHL.

Right now, the Sabres don’t have any goalies under contract for next season. Dell and Michael Houser, who ended the season in Rochester after playing for the Sabres and Cincinnati Cyclones, could be intriguing options for the Amerks.

“I love being a part of this organization, and I honestly like embracing the that role I have within the organization,” Houser said on a Zoom call Friday. “I feel extremely comfortable in all three cities.”