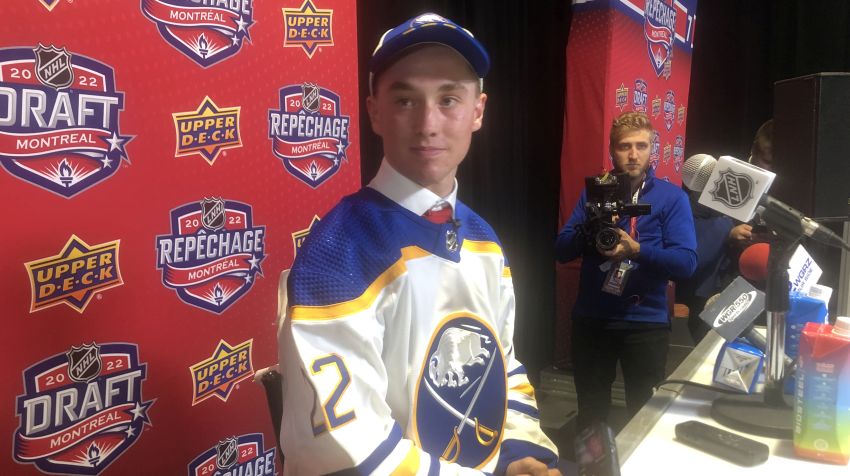 Sabres fans can get their first glimpse of prospect Noah Ostlund this week. ©2022

The most anticipated camp in a long time – the COVID-19 pandemic forced the Sabres to cancel it the last two years – begins Wednesday at LECOM Harborcenter.

The roster is loaded with top prospects. Forwards Peyton Krebs, Jack Quinn, Isak Rosen and defenseman Ryan Johnson and Owen Power will be the other first-rounders attending.

Ten of the 11 players the Sabres drafted last week in Montreal will be participating. Only Viktor Neuchev, a Russian winger, isn’t listed on the roster.

The Sabres have also invited winger Declan McDonnell, a Lake View native the Tampa Bay Lightning drafted in the seventh round in 2020. McDonnell, who scored 28 goals for the Ontario Hockey League’s Kitchener Rangers last season, is a free agent.

General manager Kevyn Adams told WGR on Monday the Sabres want to re-sign defenseman Lawrence Pilut if he is released from his contract with Chelyabinsk Traktor.

Pilut, 26, played 46 games with the Sabres over a two-year stretch before bolting to the Kontinental Hockey League following the 2019-20 season.

The Swede starred for the Rochester Americans after arriving in North America in 2018, compiling 10 goals and 49 points in 67 games.

The Sabres must make sure Pilut, a puck-moving defenseman, has an out clause in his contract.

“We definitely would love to have him back,” Adams said. “We’ve just been waiting for the proper documentation to make sure.”