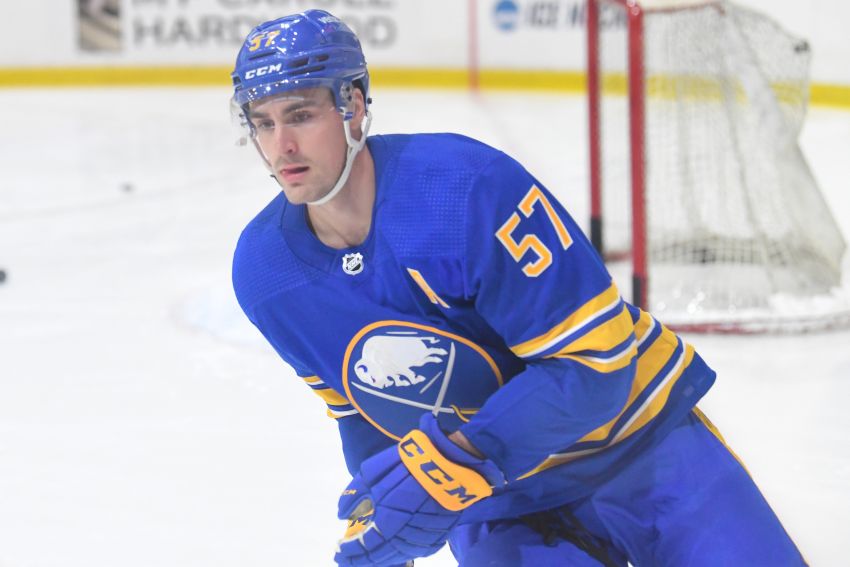 BUFFALO – Brett Murray’s transformation into one of the Sabres’ best forward prospects spans three regimes over more than five years.

Ex-Sabres general manager Tim Murray (no relation) drafted him way back in 2016. He did not receive an entry-level NHL contract right away – the Sabres had concerns about his conditioning – so he began his pro career in 2019 by settling for an AHL deal.

But over the past two years, the 6-foot-5, 228-pound Murray packed on muscle and reshaped his body. He stopped relying on his skill and developed a different style.

As a result, Murray, 23, has quietly matured into an intriguing talent, utilizing his hulking frame to become a power forward.

“I came in 6-5, lanky, not a whole lot muscle on me,” said Murray, who played his first two NHL games late last season. “But over the years, I think I’ve been able to improve every aspect of my game – speed, skill, hockey IQ. I think a lot of that just comes with experience and confidence.”

Murray looked terrific throughout the Prospects Challenge on Friday and Saturday, recording two power-play goals in front of the net and three points.

“I came in with the mindset that I wanted to be the best player out there,” Murray said following Friday’s victory inside Harborcenter. “I’m one of the older guys. I have the experience and I have the confidence. Yeah, I expected it.”

Expect Murray, the Rochester Americans’ leading scorer last season with 20 points in 27 games, to compete for a spot with the Sabres when NHL training camp opens this week.

The rebuilding Sabres, who signed a slew of journeymen free agents, have openings all over the lineup, including at Murray’s position, left wing.

He said he used his first taste of the NHL – he earned a brief recall in May – to “fuel my desire to play at that level a little more.”

Murray took an unconventional path to the big leagues. He left Penn State after his sophomore season and returned to the junior United States Hockey League, where he scored a league-high 41 goals in 2018-19.

After his junior career ended, the Jason Botterill regime challenged Murray to make a stronger commitment to his conditioning. The Sabres liked what they saw during development camp in 2019, so they invited him to the Prospects Challenge that year. His commitment during that rookie tournament earned him an invitation to Rochester’s training camp.

Murray played 2019-20 on an AHL contract before signing an entry-level deal following that season.

“He looks like an NHL hockey player physically right now, and that’s a great sign,” Amerks coach Seth Appert said. “And that’s a real credit to the work that he’s done. It’s very easy for me to tell him that he needs to be more physical and win more puck battles. It’s a hard way to play, and we all understand that. But it’s his path to the National Hockey League.

“And I think what was beneficial for him in that development last year is that he saw some early success in the American League from playing that way. He gained confidence because he was having success physically and on the goal-scoring sheet. … He earned his first NHL games because of that transformation.”

Murray credits his coaches for helping him develop a powerful style that can translate to the NHL. Having been a skill player for so long, it took time to change.

“I’ve adapted my game to my size more,” said Murray, a fourth-round pick, 99th overall. “I think I relied a lot more on my skill when I first came in. I think I realize at this level there’s a lot of skilled hockey players that are really good, so you need to kind of differentiate yourself from the pack.”