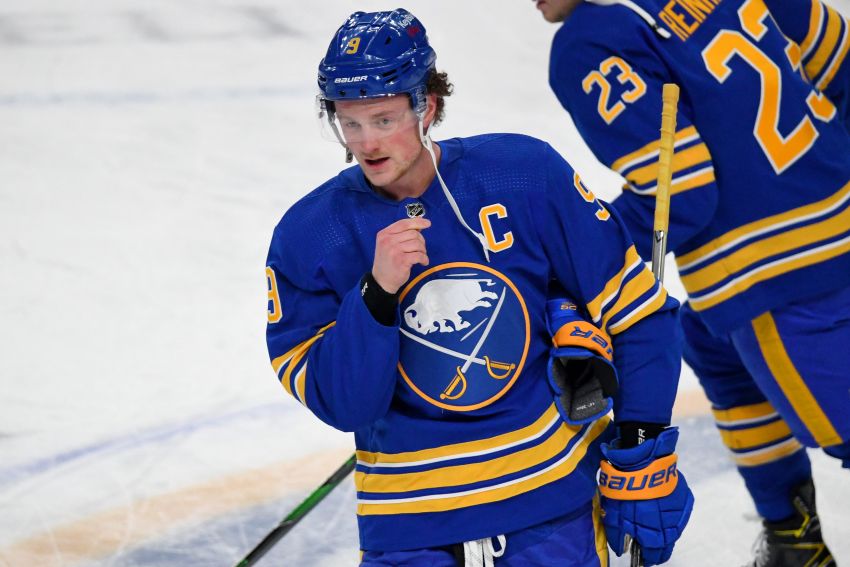 OK, so maybe Jack Eichel hasn’t played his last game for the Buffalo Sabres. Perhaps later this season, if the captain undergoes neck surgery, he could wear blue and gold again.

That thought, of course, seemed preposterous not long ago. Eichel wants to be traded. The relationship between the Sabres and their frustrated star seems to have suffered irreparable damage over his desire to have artificial disc replacement surgery, a procedure the team won’t approve.

But today, 19 weeks after Eichel spoke of a “disconnect” between the sides, he will report to KeyBank Center for his training camp physical and testing.

Eichel was among 58 players – 34 forwards, 18 defensemen and six goalies – on the camp roster the Sabres released this afternoon. Defenseman Rasmus Dahlin, an unsigned restricted free agent, is also on the roster.

After a day of physicals and testing – unlike past years, there’s no media availability Wednesday – the Sabres will hold their first on-ice sessions Thursday at LECOM Harborcenter. General manager Kevyn Adams and coach Don Granato are scheduled to talk to media Thursday morning.

Adams, of course, will be asked to provide clarity on Eichel’s situation.

Eichel’s decision to come to camp isn’t too surprising. The ultra-talented center has five seasons remaining on his eight-year, $80 million contract. If he no-showed, the Sabres could suspend him. He wasn’t going to forfeit that kind of money.

Considering Eichel, 24, has a herniated disc in his neck, it’s unclear if he can participate in camp. If he fails his physical, the Sabres could place him on injured reserve or long-term IR.

Adams said after the NHL Draft ended July 24 he would have “no problem” if Eichel was still with the Sabres when camp started.

At some point in the near future, Eichel will likely need to have surgery, perhaps the fusion the Sabres reportedly favor. An active NHL player has never had disc replacement, so the Sabres haven’t signed off on it.

If Eichel has surgery and recovers, he almost certainly needs to play games to prove he’s healthy and can showcase his past form. That should generate more interest from teams.

Clearly, the Sabres still value Eichel, who was injured March 7, like the superstar who performed at an MVP level for much of the 2019-20 season. They want a massive return in a trade and refuse to budge from their demands. Another team will have to pry him away. An offer to their liking never materialized during the offseason.

Other teams have been hesitant to give up prime assets for an injured player who is coming off a season in which he scored two goals in 21 games.

The camp schedule is below: