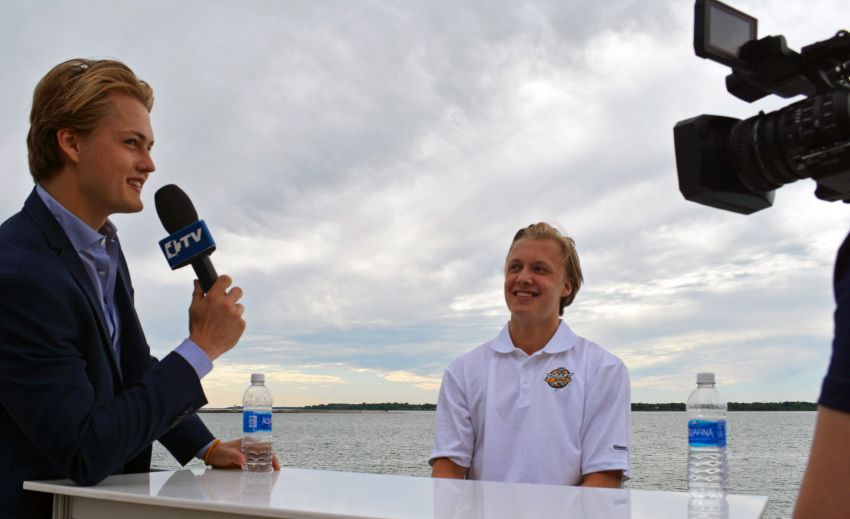 BUFFALO – Growing up, Sabres prospect Alexander Nylander and his brother, William, a Toronto Maple Leafs youngster, were ultra-competitive in whatever game or sport they played.

“We fought a lot, there was a lot when we were playing knee hockey, shinny,” Alexander Nylander said this morning inside KeyBank Center. “We always came clean after it and were best buddies again.”

Don’t expect to see the Nylanders pummel each other tonight in St. Catharines, Ontario, during an exhibition tilt, their first-ever on-ice meeting.

Still, Alexander, 18, said he would finish a check against William, 20.

“We’re really competitive,” Alexander said. “We compete on whatever we’re playing – tennis, Ping Pong, golf. This is going to be really fun tonight.”

Alexander, the eighth overall pick in June, has learned a lot from watching William, the eighth selection in 2014, build his career. William has already played 22 games.

“He’s helped me a lot,” Alexander said. “We always were both really competitive since we play a lot of other sports, too. We really liked to win. Just trying to help each other get better.”

The Nylanders’ father, Michael, was originally going to attend but will stay at home, Alexander said.

While Nylander said his comfort is increasing, he still has a long way to go. Since the Sabres have an AHL option with him, they could assign him to the minors in the next week or two.

“The pace of which he is playing there with the puck has to increase,” Sabres coach Dan Bylsma said. “That something that’s new for him, he’s learning to adjust to.”

The Sabres are 1-1 so far this preseason. They also host the Leafs on Friday.

Bylsma wants goalie Anders Nilsson to play the entire game. Jason Kasdorf will back him up.