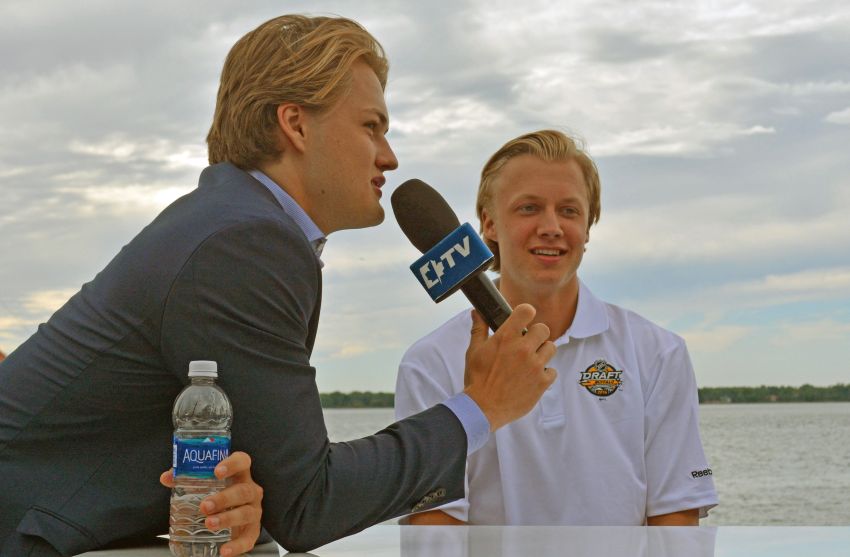 ST. CATHARINES, Ontario – Growing up, Buffalo Sabres prospect Alexander Nylander and his brother, William, a Toronto Maple Leafs youngster, were ultra-competitive in whatever game or sport they played.

“We fought a lot, there was a lot when we were playing knee hockey, shinny,” an excited Alexander Nylander said Thursday morning prior to the Sabres’ 1-0 preseason shootout win, their first-ever meeting at any level of hockey. “We always came clean after it and were best buddies again.”

The Nylanders, who only faced each other a few shifts, never pummeled each other inside the Meridian Centre. Still, Alexander, 18, said he was willing to finish a check against William, 20.

Alexander, the eighth overall pick in June, outplayed his brother, showcasing his speed and slick talents.

“It was something special and it was really fun,” Alexander said.

Both brothers missed a shootout attempt.

“I thought it was money lock for him with his move,” Sabres coach Dan Bylsma said of Alexander’s attempt.

Alexander created a scoring chance from the slot in the first period before zooming down the right wing and hitting the post.

“I think my first period was the best period today,” Nylander said.

Nylander impressed Bylsma, who said he “kind of saw spurts of his game and what he can bring.”

“I thought he showed speed, made a couple nice plays, broke in and beat the guys with his speed … won some puck battles in the offensive zone,” he said.

Nylander looked like a rookie in the second period, getting hit at the Toronto blue line and coughing the puck up near his net on one power-play shift.

“That’s just kind of a young kid finding his way in the game,” Bylsma said.

The Sabres’ real star was goalie Anders Nilsson. The new backup to Robin Lehner looked in control throughout, stopping 23 shots and all four shootout attempts for the shutout. The Sabres pumped 38 shots on Leafs goalies Garret Sparks and Kasimir Kaskisuo.

“He wants to prove what he can be in the net, be a capable goaltender when he gets the opportunity,” Bylsma said of Nilsson. “He’s had two opportunities to this point (this preseason), he’s been really good in both of them, looked real capable. It gives you a comfortable feeling when you see a guy like that in net, be able to backstop your team.”

While he said his comfort is increasing, he still has a long way to go. Since the Sabres have an AHL option with him, they could assign him to the minors in the next week or two.

“The pace of which he is playing there with the puck has to increase,” Bylsma said Thursday morning. “That something that’s new for him, he’s learning to adjust to.”

The Sabres, 2-1 this exhibition season, host the Leafs tonight at KeyBank Center.

Notes: Sabres defenseman Erik Burgdoerfer, a defenseman on a two-way contract, is the only player Bylsma has dressed all three games. Burgdoerfer, 27, has never played a regular-season NHL game. … The Sabres’ AHL affiliate, the Rochester Americans, opens training camp today at HarborCenter in Buffalo. … Billy Dea, a star with the Buffalo Bisons hockey team in the 1960s, has been named one of the 2017 American Hockey League Hall of Fame inductees.