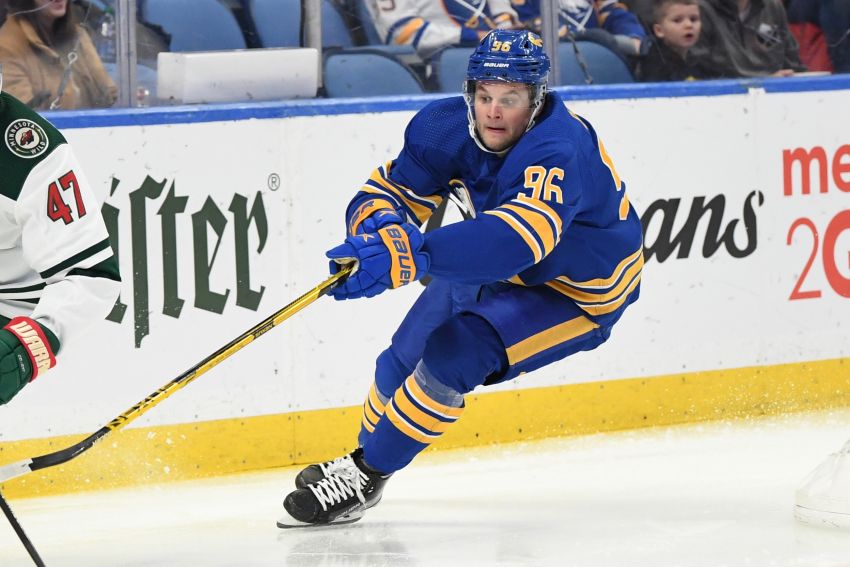 BUFFALO – The Sabres on Monday placed forward Anders Bjork, a healthy scratch both games this season, on waivers, according to reports.

Bjork, 26, lost his spot in the lineup late last season and never regained it, sitting out more than a month straight.

This year, the American had an underwhelming training camp, and he never appeared to be close to cracking the forward corps.

With forward Riley Sheahan ready to be activated from injured reserve after battling a muscle problem, the Sabres no longer have room for Bjork on the 23-man roster.

Bjork, who could be sent to the Rochester Americans, hasn’t played in the AHL since a seven-game stint with the Providence Bruins in 2019-20.

“You just got to be ready for opportunity,” Sabres coach Don Granato said Oct. 6 when asked what Bjork must do to secure regular NHL duty. “When there is opportunity, that window of opportunity, you got to be able to seize it and perform to the point that coaches make decisions you can’t take the guy out type of thing.”

Bjork arrived in Buffalo late in the 2020-21 season as part of the Taylor Hall trade with the Boston Bruins.

The Sabres, who begin a four-game, eight-day western road trip tonight against Connor McDavid and the Edmonton Oilers, hope getting away offers them an early opportunity to bond.

But Granato, whose Sabres are 1-1-0, also likes the challenge the trip presents. They also face the Calgary Flames on Thursday, Vancouver Canucks on Saturday and Seattle Kraken next Tuesday.

“We need to be challenged,” Granato said Monday in KeyBank Center. “Unfortunately, you can’t take over where you left off last year. We were in a pretty good groove and pretty good sync last year, things started to feel easy only because of all the work the guys put in. Now we got to put all that work back in because it all went away.

“And so we’re starting to. With a younger team you kind of learn you just don’t flip a switch when you come back in October and it all works like it did in April. So I’ll judge this trip about not the camaraderie and team building but how well we worked toward that initiative.”

The Sabres on Monday assigned forward Matej Pekar, who has been recovering from an injury he suffered last season, to Rochester.

Pekar, 22, compiled three goals and six points 47 games with the Amerks last year. The Czech missed all of camp.