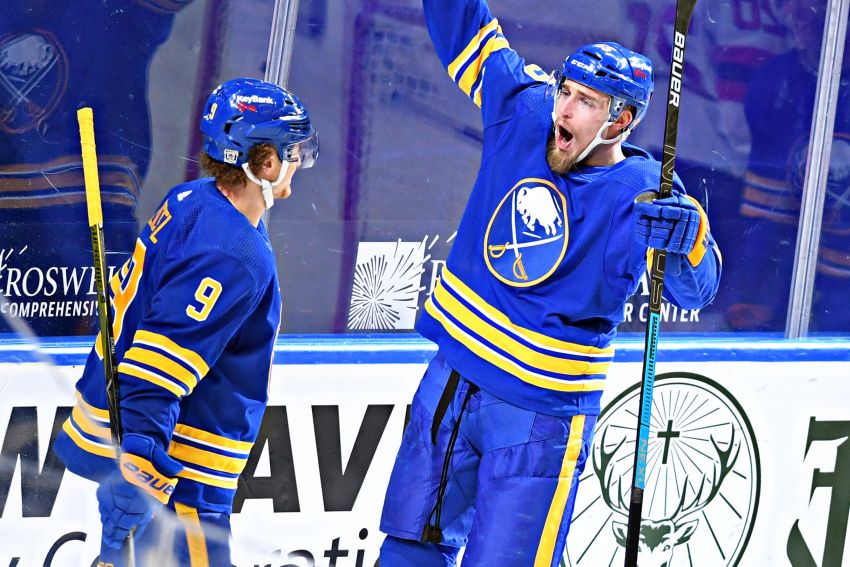 BUFFALO – As a defenseman, Rasmus Ristolainen understands how a big body in front of the net can be a weapon during a power play.

“If some other teams, they have some good net-front presence, I know how hard it is to play when there’s guys standing in front of the net screening (the) goalie all the time,” the Sabres veteran said after scoring a power-play goal in Sunday afternoon’s 5-3 loss to the New Jersey Devils at KeyBank Center.

For the past two games, the 6-foot-4, 221-pound Ristolainen has been a dynamic net-front presence, moving up from his normal point position to wreak havoc.

Ristolainen tied Sunday’s game at 3 early in the third period, grabbing winger Victor Olofsson’s pass and beating goalie Eric Comrie from in close. In the second period, he screened Comrie on defenseman Rasmus Dahlin’s power-play goal, which tied the contest at 2.

“I can get in the battles a lot and just win those loose pucks and make chaos,” Ristolainen said on a Zoom call.

The Sabres also utilized Ristolainen’s hulking frame in front of the net at times last season.

“It’s a curveball that changes the mix,” Sabres coach Ralph Krueger said. “He just has so much fun with that. Risto’s in outstanding form thus far this season and much deserved of the extra ice time that he’s getting, especially in a role like that.

“What it does is it does definitely consume not only the goalie but the D in front are spending time on him. It ends up being a bit of a four-on-three outside of that. The guys have been doing really well at finding that opening.”

Ristolainen also recorded an assist in a game-high 28 minutes, 11 seconds of ice time.

The Sabres recalled Mittelstadt from the taxi squad Sunday morning.

Mittelstadt, 22, skated 10 minutes, 40 second in his second appearance this season, mostly at left wing on the fourth line beside center Curtis Lazar and Riley Sheahan.

Krueger also chose Mittelstadt over winger Jeff Skinner in a late six-on-five situation with the Sabres pushing for the tying goal.

“We had a second group of six coming up here, but we thought Mittelstadt was really creating a lot tonight,” Krueger said. “He looked really fresh. He didn’t play yesterday. That’s purely a gut decision that we thought he would be a good buzz out there in that last stretch.

“If you watch his game tonight, he was as fresh as anybody because of that.”

“Throwing Taylor and Jack together here and there, you like to throw the opposition off balance. They had a lot of O-zone time, they had a lot of opportunities,” Krueger said. “They just haven’t been able to connect for that final product, the goals.”

Eichel and Hall have combined for three goals this season.

Krueger said the Sabres sat Jokiharju because of the upper-body injury that sidelined him two games last week. The Finn returned Saturday.

The Sabres begin a four-game road trip Tuesday against the New York Islanders.