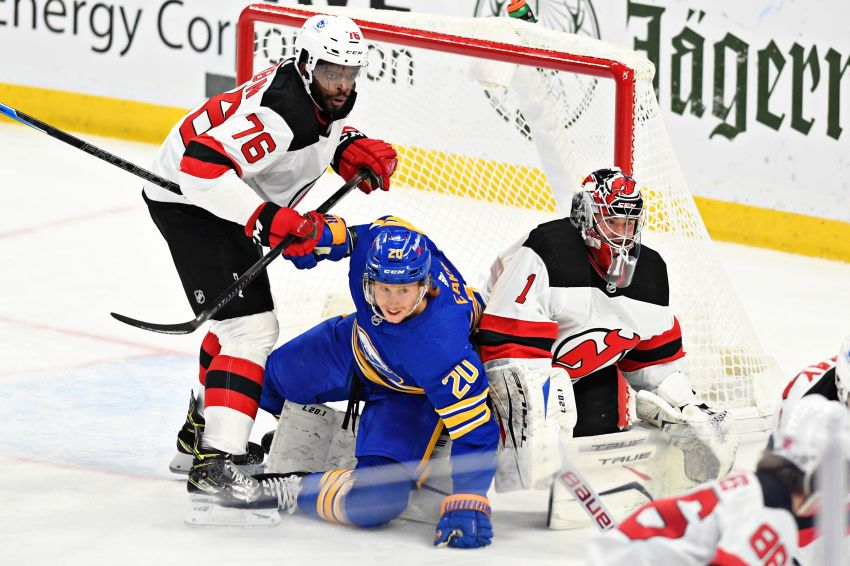 Cody Eakin (20) tries to get up between New Jersey’s P.K. Subban and goalie Eric Comrie on Sunday afternoon. ©2021, Micheline Veluvolu

Sooner or later, it was going to bite them.

The Sabres, at least by their standards, have enjoyed a decent start this season. Sunday afternoon’s 5-3 loss to the New Jersey Devils inside KeyBank Center dropped them to 4-4-2.

They’re just one point behind the Pittsburgh Penguins for the fourth and final playoff spot in the stacked East Division. In these parts, being tied for fifth place – New Jersey also has 10 points – can be measured as progress.

Still, 10 games into the season, the Sabres have earned just one convincing win, way back on Jan. 18, when they annihilated the Philadelphia Flyers 6-1.

If the Sabres want to crack the postseason for the first time since 2011, they must improve some facets of their play in a hurry.

On Sunday, they fell behind 20 seconds into the contest, allowing a breakaway goal to Michael McLeod. So much for the Sabres helping goalie Carter Hutton ease back into his first game in 12 days.

“That definitely wasn’t what I wanted,” said Hutton, who was hit in the head Jan. 19. “Obviously, I need to make a save there.”

The first of McLeod’s two goals turned out to be harbinger. Andreas Johnsson scored with 17 seconds left in the opening period.

Not surprisingly, the Sabres roared back in the second period. Center Curtis Lazar scored before defenseman Rasmus Dahlin’s power-play goal tied it.

But Miles Wood scored with 0.9 seconds left in the second period, converting his own rebound from a breakaway.

“Truly unacceptable in those phases of the game when you need to be tight and activate properly defensively and also understand where you are with the game management,” Krueger said on a Zoom call.

Dahlin said: “We made a lot of mistakes out there. We didn’t play simple when we had to.”

The Sabres, who overcame an early deficit to win a 4-3 shootout against New Jersey on Saturday afternoon, battled back. Defenseman Rasmus Ristolainen’s power-play score – he has been playing in front of the net – tied it early in the third period.

McLeod broke the tie at 10:43, beating Hutton between the legs from the inside of the left circle. Wood’s empty-net goal sealed the game.

“These are (such) important games,” Ristolainen said of the Sabres’ recent contests against the Devils and New York Rangers. “It doesn’t need to be pretty. I just feel like we are (the) better team, we have more skill but we just need to match the work ethic.”

“We managed the puck poorly, especially in transition. We were too complicated through the neutral zone and it fed what they’re good at. It fed their offense. It fed their speed. We just couldn’t get that out of our game today.”