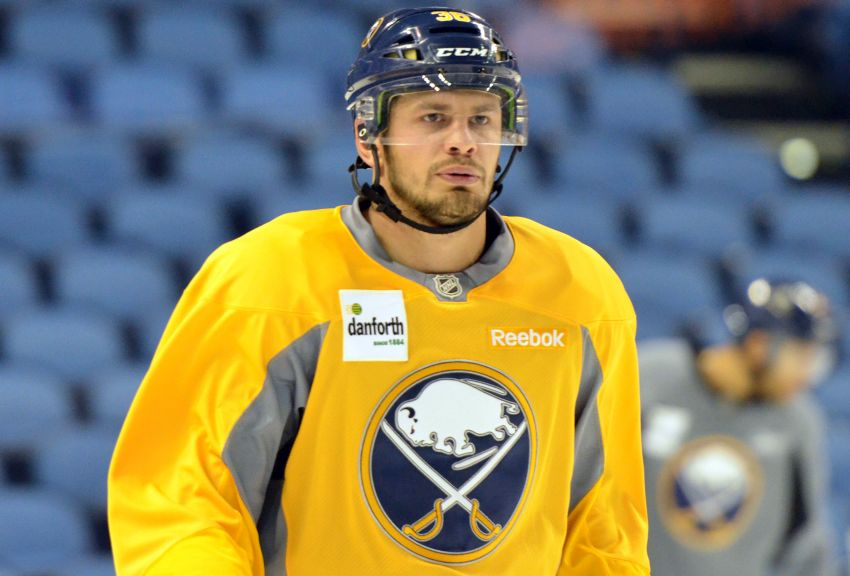 “Broke a bunch of things in there,” the oft-injured Sabres winger said Thursday following practice inside the First Niagara Center.

Still, less than three weeks after the scary incident, the Angola native is on the road back to game action. He skated with his teammates for the first time Thursday with a red non-contact jersey and a full face shield. He has no timetable for a return.

Sabres coach Ted Nolan said Kaleta “came out of it as good as you can.”

“We’re just really glad he’s back on the ice,” he said. “He loves to play. He loves to play in Buffalo. He’s a Buffalo kid, so he’s all excited again.”

In other news, the Sabres assigned defensemen Jake McCabe and Mark Pysyk to Rochester on Thursday. Both youngsters have recovered from preseason injuries and practiced with the big club before getting sent down.

Pysyk said he injured his shoulder during his first preseason shift.

“He’s going to be back,” he said. “It’s one of those things where certain people just need a little reminder how good they can be. So we never lost faith in his ability.”

In his fourth NHL appearance, top prospect Sam Reinhart skated only six minutes, 39 seconds on the fourth line between Nick Deslauriers and Cody McCormick in the Sabres’ 4-3 shootout win against Carolina on Tuesday.

Why did Nolan slash the 18-year-old’s minutes?

If Reinhart faces Panthers defenseman Aaron Ekblad tonight, it will be the earliest meeting of the No. 1 and 2 draft picks since 1997, according to the Elias Sports Bureau.

Why are the Sabres keeping 19-year-old defenseman Nikita Zadorov, the No. 16 pick in 2013, if he’s not playing?

“I can’t answer that question straight up, but we’re trying to do the best with the situation, keep working at him, get his conditioning a little better,” Nolan said. “He’s another promising young prospect that we have to make sure we do the best for. So right now, we’re working him as hard as we can in practice, make him a little angry, make him want to play us now.”

Rip Simonick, the Sabres’ equipment manager all 44 seasons, was inducted into the Greater Buffalo Sports Hall of Fame on Thursday.

What does Nolan think of when he hears Simonick’s name?

“I think of Gilbert Perreault, Rene Robert, the French Connection,” he said. “I think of the Aud, and Rip Simonick is right in that group. You think of hockey in Buffalo, you think of Rip Simonick. I think it’s a great honor. Some of those people you meet in hockey, the legends of the game, sometimes they’re just not on the ice.”

Nolan on comparing the Sabres to a peewee team following Monday’s embarrassing 5-1 loss to Anaheim: “Sometimes when you say words they take it literally. We didn’t play very well last game. You could make a comparison it’s just your like child when they say, ‘I hate you, dad.’ They don’t really hate you. The next minute they say, ‘I love you.’”