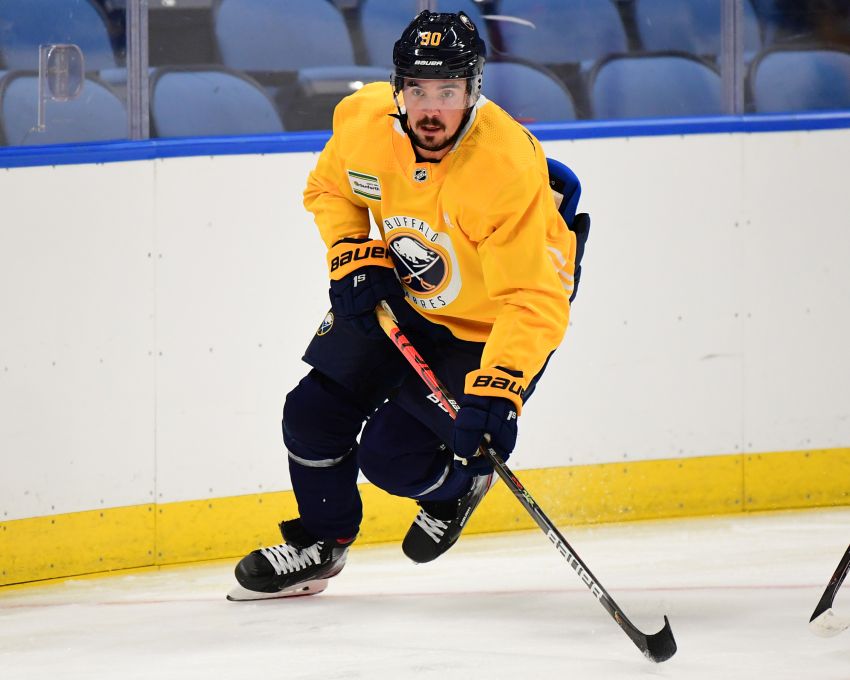 Still, Ralph Krueger could tell being named one of the Sabres’ two alternate captains earlier this week had special meaning to Johansson.

“His Swedish persona (was) able to kind of tuck it away in the talk with me, but I thought he was extremely honored,” Krueger said prior to Thursday’s 3-1, season-opening win over the Pittsburgh Penguins. “As a new player, he’s come in here and made a huge impact. …

“He seemed emotional in a good way.”

The honor surprised Johansson, who earned an ‘A’ before playing one regular-season game for the Sabres.

“I didn’t see it coming,” said Johansson, who signed a two-year, $9 million contract on July 9 after spending last season with the New Jersey Devils and Boston Bruins.

He added: “It kind of tells you that you’re doing something right and a good person. … (I’m) just honored to get that opportunity. Yeah, I’m really proud of that.”

How has Johansson, 28, acclimated to his new team so quickly? He credits a dressing room full of “good people.”

“It all makes it easier to fit in if you’re part of the group,” said Johansson, who briefly wore an ‘A’ with New Jersey.

Krueger said Johansson uses his voice – “Whether it’s on the ice, off the ice, the way he treats people,” he said – selectively. That, of course, makes his words hold more weight.

“(He’s) a mature leader in our midst right now in a group that’s learning and growing every day,” said Krueger, who named defenseman Jake McCabe the other alternate captain. “An ideal acquisition in the summer.”

He added: “He’s a leader of the concepts and principals we are looking for right through the lineup. He understands what it takes to be competitive through a long NHL season.”

When the Sabres inked Johansson in free agency, it appeared he would skate at left wing. But his experience at center – he played there as a rookie with the Washington Capitals – intrigued the Sabres, a team short on talent down the middle.

So Johansson, who has scored 120 goals and 334 points in 588 NHL games, spent training camp playing center.

“Once I got here we kind of talked about it a little bit,” Johansson said of returning to the middle. “I’m open to anything, whatever I can do to help the team. …

“I’ve played a lot of center before. I like it. I feel like it gets me involved a lot.”

“You see (Sobotka) as a defensive player, but he’s got some really good vision, handles the puck well,” Johansson said. “All through the camp when I’ve seen him play he makes really good, smart plays. He’s a good, tough, strong player to play against.”

Krueger, who said everything was up for competition during camp, probably wanted to show Hutton respect by awarding him Thursday’s start inside PPG Paints Arena.

“With everything right now, we’re really keeping the picture small and going one game at a time,” Krueger said. “Let’s start with Carter Hutton today and go on tomorrow.”

Evan Rodrigues was the Sabres’ odd forward out Thursday.

Rodrigues, 26, was awarded a one-year, $2 million contract in arbitration during the summer. He scored nine goals and 29 points in 74 games last season.

“It’s always the mix in the end, and the competition here, as I’ve told you all through training camp, has increased, our depth has increased,” Krueger said of why Rodrigues was the 13th forward. “When you see that level of scratch, you can see that it’s not just words, it’s actions here.

Meanwhile, John Gilmour, the biggest surprise of camp, was the Sabres’ healthy scratch on defense.

As expected, the Sabres recalled winger Victor Olofsson and defenseman Henri Jokiharju from the Rochester Americans on Thursday morning.

The Amerks have signed forward Brett Murray to a one-year, AHL contract, the team announced Thursday.

The Amerks invited him to their camp following a strong showing with the Sabres at the Prospects Challenge rookie tournament.