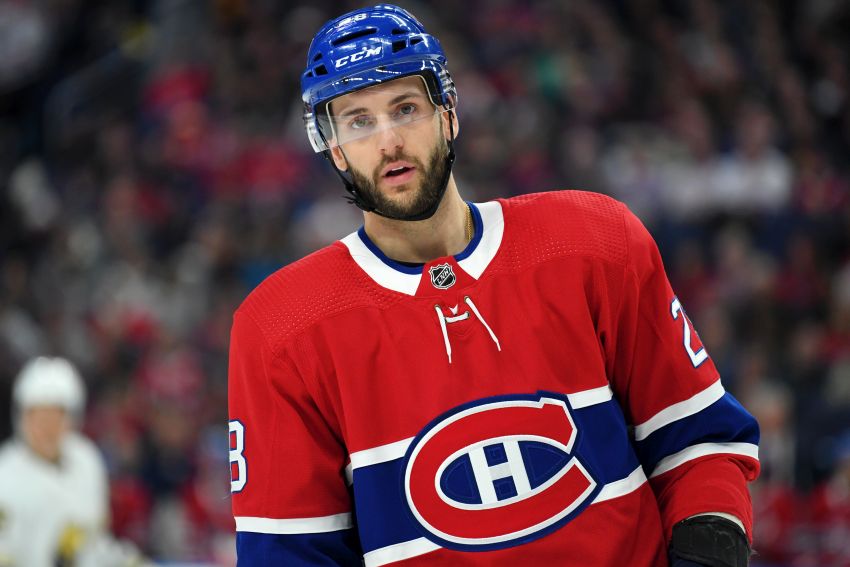 Marco Scandella played two and a half seasons for the Sabres. ©2020, Micheline Veluvolu

BUFFALO – Marco Scandella saw the end here coming. Not only did the Sabres have a surfeit of defensemen, he had an expiring contract.

Still, when the Sabres traded him to his hometown Montreal Canadiens on Jan. 2 in exchange for a fourth-round pick this year, he was stunned.

“You’re always in shock when you get traded,” Scandella said prior to Thursday’s 3-1 win over the Sabres, his first visit back at KeyBank Center. “I was a little bit prepared. I knew it was a possibility, we had a lot of D in Buff.

“So I’m just happy to be traded home, though.”

Right now, Scandella is living a dream. He said his first game with the Canadiens on Jan. 4 at the Bell Centre, a 3-2 shootout loss to the Pittsburgh Penguins, was “surreal.”

“I felt like a lot of emotions in that building,” he said. “(I) watched the Canadiens growing up, always wished to play for them. Getting the opportunity is just special. I’m truly lucky.”

Scandella has fit in well with Canadiens, skating at least 19 minutes in six of the first 10 games he played.

“He’s an experienced defenseman,” Canadiens coach Claude Julien said. “He’s a guy that for the most part is known for his defensive stability. He’s got a good shot, offensively, good first pass. For us, it was about stabilizing the defensive part of our game. We needed some depth there.”

But Scandella shouldn’t get too comfortable. The Canadiens, having earned only 51 points entering Thursday, began the day in sixth place, tied with the Sabres.

They were 10 points out of the Atlantic Division’s final playoff spot. The odds of them making it are slim.

Scandella could be flipped before the Feb. 24 trade deadline. Given his solid play, he might fetch a higher return than the Canadiens paid.

Following a brutal 2018-19 campaign, Scandella morphed into arguably the Sabres’ most reliable defenseman early this season.

“I worked really hard in the offseason to correct some things,” said Scandella, who was often a gaffe machine last season. “I had a couple injuries that I had to get through.”

“It made my game easier to start the year,” Jokiharju said.

Scandella, who was acquired from the Minnesota Wild in June 2017, endured a lot of losing in his two and a half seasons with the Sabres.

He said it’s “inevitable” the Sabres break out soon following years of futility.

“There’s a lot of talent in that locker room,” he said. “Great coaching.”

The Sabres welcomed Scandella back on the video boards during an early break in the action. Scandella responded by waving to the crowd.

On Thursday, Rodrigues skated at left wing on the first line beside center Jack Eichel and Sam Reinhart.

Zemgus Girgensons, who spent several games beside Eichel, went back to his normal place with Johan Larsson and Kyle Okposo.

Okposo left with game with an upper-body injury after playing five shifts in the first period. Krueger said Okposo, who has a scary history of concussions, did not suffer another one.

Later in the contest, Sabres coach Ralph Krueger mixed up his lines. Most notably, he reunited Jeff Skinner, a 40-goal scorer last season, with Eichel and Reinhart for the first notable stretch this season.

“We just felt we weren’t creating enough, so we put all the eggs in that line as far as the offensive power’s concerned but it didn’t work,” Krueger said of moving Skinner up. “It showed flashes and moments of opportunity, but we didn’t take them.”

Thoughts on Tuesday’s embarrassing loss, the goalie situation, how the roster could change over the next month and more!