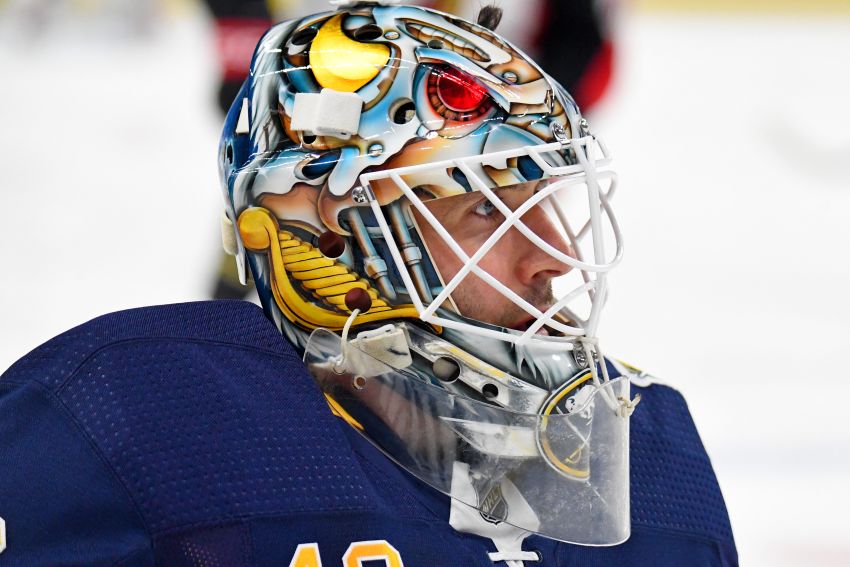 Throughout a three-month slump in which he has morphed into a spare part, Hutton, 34, has quietly gone about his business, expressing confidence in his ability to bounce back and showing support for his teammates.

With workhorse Linus Ullmark sidelined three to four weeks with a lower-body injury, Krueger has two options in goal: Hutton or AHL All-Star Jonas Johansson, who was recalled from the Rochester Americans for the first time Wednesday.

“We know that Carter can step up here,” Krueger said following Wednesday’s practice inside KeyBank Center. “He had an excellent start of the season, some struggles of late. But it was more also the team performing differently in those games. There was some overtimes in there that didn’t tip his way, so we’re cheering for him as loud as anybody to get back on track result-wise.

“But he’s always worked hard and has had some good weeks now with (goalie coach) Mike Bales, they’ve done a lot of extra work, and we feel Carter is ready to be the guy to step in here and carry the ball.”

Hutton, of course, wants to keep a narrow focus for what could be his final opportunity. He knows he hasn’t been awarded the net.

“If I don’t play well, J.J. is going to play,” said Hutton, who has lost 11 straight games. “There’s no security in what we do. This is the NHL. In that sense, I’m just going to go out there and do what I do. It’s hard to really look at the big picture in that sense. I’m not looking down the road or whatever. You just try to stay in the moment. It’s just hockey. I leave the rink I’ve got a family to go to.”

Hutton has endured a stunning in-season decline. Since his torrid start, he has compiled a wretched 0-7-4 record with a 4.22 goals-against average and an .867 save percentage.

That’s the worst goals-against average and save percentage of any NHL goalie who has played at least six games since Oct. 23.

Krueger has mostly used Hutton in back-to-back situations for two months, starting him just two of the last 20 games.

So Hutton has spent time working closely with Bales to sharpen his game.

“We find different things to chip away at, kind of build your game,” Hutton said. “It’s been a bit of a roller coaster this year, obviously. Some stuff that goes on behind the scenes. You try to stick with it. It’s such a long season, right? For me, nothing changes. I’ve been doing this for a while now. (I’m) just excited to get in there and play. It’s the same game.”

Hutton said he doesn’t believe anyone in “this room has ever doubted me or anything.”

“Sometimes the picture can get painted outside, you know what I mean?” he said. “But not everybody has the information, what’s going on. For me, I played a lot of games. It’s not like I just fell off a cliff here. It’s been a rough go, but it’s just hockey. I feel like for a long time I’ve felt good here, and it’s just a matter of getting in.

“At the same time, I haven’t played because Linus has played so well. It wasn’t a lack of what I was doing in practice or anything like that. Linus has been … the backbone so far. Now I have time to get in there and just play my game.”

Ullmark, who was injured late in Tuesday’s embarrassing home loss to the Ottawa Senators, has become the Sabres’ backbone.

“I’ve been in this situation before,” Hutton said of being injured. “I feel bad for him because he was playing great. He’s obviously been rock solid all year, and he’s been having a great year, for sure. It’s a tough injury.”

One thought on “With Linus Ullmark injured, Sabres will likely turn to goalie Carter Hutton”