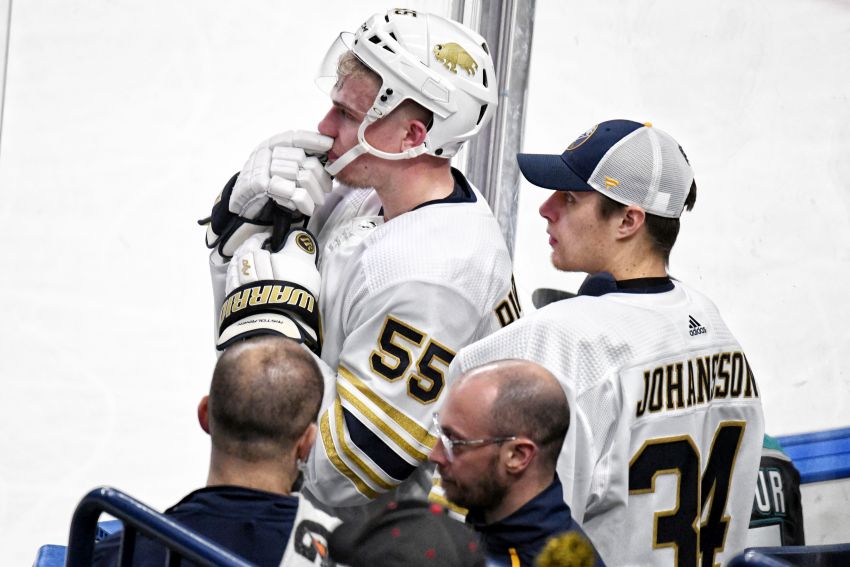 BUFFALO – For about the opening nine minutes of Thursday’s 3-1 loss to Montreal Canadiens, it appeared some desperation had finally kicked in and the Sabres grasped they’re playing for their season right now.

They pummeled their Atlantic Division rival early, taking a 1-0 lead on Jack Eichel’s power-play goal at 7:11, his 30th this season.

When the Canadiens finally mustered their first shot on goalie Carter Hutton at 10:29, the Sabres had already pumped nine on Carey Price.

Then the Sabres simply stop generating offense. They registered only two shots the rest of the opening period and three in the second.

The Canadiens, meanwhile, roared back, grabbing the lead by 3:05 into the second period after the Sabres left high-scoring winger Brendan Gallagher wide open in front.

Early the third period, the Canadiens had outshot the Sabres 22-5 since since registering their first shot.

Despite just a 2-1 deficit, it felt like the Sabres trailed by three or four goals.

“It’s difficult to understand, really,” Sabres coach Ralph Krueger said. “We came out of the gate as we had hoped for as far as we had a lot of movement, very confident on the puck, lots of support. We probably didn’t create as much offensively as we would have liked to from all that control and we had a couple of opportunities where we needed to get the 2-0 lead. We didn’t get it.”

This stretch in which the Sabres play nine of 10 games at KeyBank Center was supposed to ignite them, help them get back in the playoff chase.

Instead, they’ve lost their first two games – remember, the hapless Ottawa Senators beat them 5-2 on Tuesday – and frittered away a terrific opportunity to erase a daunting 10-point deficit.

The Canadiens’ victory win broke a tie with the Sabres, moving them into fifth place in the division.

“Not nearly desperate enough, and that’s kind of been the message in the room, especially after today is guys got to understand the position we’re in and we do like to keep the picture small, but the last two games … we’ve let ourselves down here and nobody’s going to feel bad for us,” Sabres defenseman Jake McCabe said.

How can the Sabres, who haven’t made the playoffs since 2011, snap out of this funk? They’ve been going through this for years.

McCabe should wear earplugs next game, because if the Sabres fall behind or look listless again, you can bet the surly fans will boo them like they did at the end of the second period Thursday.

Of course, who knows how fans many will show up? Many have already tuned out the Sabres and given up on the season. Noisy Canadiens supporters probably comprised close to half of Thursday’s announced crowd of 16,604.

At the end, they took over the building, loudly chanting, “ole, ole, ole,” a favorite from the Bell Centre in Montreal.

“At some point, we got to just stick to it here,” Hutton said. “We got to realize other teams are more desperate than we are, and we have to find a way to answer the bell here, especially at home.”

Hutton, who lost his 12th straight game (0-8-4), answered the bell Thursday, making 27 saves in just his third start in the last 21 games.

“Wins and losses are not really goalie stats,” said Hutton, who hasn’t won a game since Oct. 22. “I can’t control whether we score or not; I can just control the way I compete and play.”

Hutton went 19 days between starts, so waiting nine and a half minutes to see a shot early wasn’t a problem.

“I haven’t seen a shot for a few weeks here, I haven’t played,” he said. “So what’s the difference? It’s all in your head, right? I think everyone overthinks it but me.”

Sabres winger Kyle Okposo left the game with an upper-body injury after playing only five shifts in the first period. Krueger said Okposo, who has a scary history of concussions, did not suffer another one.

Krueger said the injury is below the neck and he expects him to miss Saturday afternoon’s home game against the Columbus Blue Jackets.

Eichel became the first Sabres to record 30 goals and 30 assists in a season since winger Jason Pominville in 2011-12.

After Montreal winger Tomas Tatar’s empty-net goal sealed the game, a frustrated Eichel broke his stick on the goalpost.

3 thoughts on “Sabres lose again, fall behind Canadiens: ‘We’ve let ourselves down’”