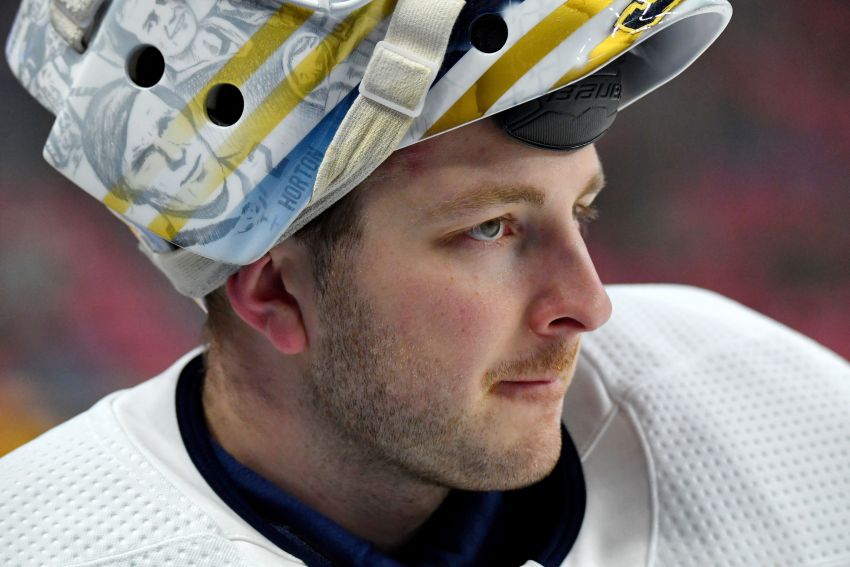 BUFFALO – Goalie Linus Ullmark’s second full NHL season has quickly become a blur. The Swede has started 32 of the Sabres’ 49 games, putting him on pace to play a career-high 54 times entering tonight’s contest against the Ottawa Senators.

The loquacious Ullmark, 26, has enjoyed a massive workload since Nov. 19, starting 24 of the last 29 games. During his emergence as the Sabres’ No. 1 goalie, he has played more games and minutes – a whopping 1,427 – than any NHL netminder.

“You don’t really realize how many games you’ve played until you actually stop and you have a break,” said Ullmark, whose Sabres had a bye last week before the NHL All-Star break. “You realize, ‘Oh, shoot, we only have like 30 games left.’ But it doesn’t feel like you played 50 (team) games, because it feels like the other week we were in Sweden.”

The Sabres played in Sweden on November 8 and 9. Back then, Ullmark would start about every third game as Carter Hutton’s backup.

But Hutton’s struggles – he hasn’t won a game since Oct. 22 – have forced the Sabres to rely heavily on Ullmark. Tonight’s game at KeyBank Center will likely be Ullmark’s 13th nod in the last 14 contests.

“It seems like every game he’s making three to four saves that could be highlight-reel saves,” Sabres winger Kyle Okposo said following Monday’s practice inside LECOM Harborcenter. “He seems like a goalie who doesn’t beat himself. You’re going to have to make good plays to beat him.”

Overall, Ullmark has compiled a 16-13-3 mark with a 2.70 goals-against average, a .914 save percentage and one shutout this season.

As his role has morphed into perhaps the team’s most demanding and pressured-packed, Krueger said affable Ullmark, a unique personality who loves focusing on positives, has remained the same person.

“What we like is nothing has changed in the way he behaves off the ice or away from the games. Nothing,” he said. “He’s the same guy he was in the summer when I spoke to him. He seems to have a really good balance, which helps as a starter.

“And somebody taking the workload he has, he’s managing his game, his life away from the rink really well, because, to tell you the truth, I don’t see a difference in him to entry to today.”

Krueger, of course, sees a difference in Ullmark during games and practices.

“That’s where you want to see it in somebody carrying the load he does,” he said. “His personality, he’s stayed very upbeat, he’s positive, he’s a very high-energy guy in our environment of team and he’s always looking for solutions, and it shows up in his game.”

Ullmark credits the coaches and staff he has worked with throughout his career for letting be himself.

“There hasn’t been any need to be anyone else,” he said. “You’re fine as you are. That’s what I appreciate in the organization here, too, that you’re allowed to be who you are. There’s no need to put up a front or anything.”

Four years ago, Ullmark seemed destined to become an NHL starter. After just three appearances as a rookie with the Rochester Americans, the Sabres recalled him.

Ullmark returned to the minors after playing 19 times and developed into one of the AHL’s top goalies over the next two and half seasons, occasionally receiving recalls to the Sabres.

In Rochester, he evolved, playing a career-high 55 games in 2016-17. He also worked with Katy Tran Turner, the Sabres’ former head of human science, to improve his focus.

Ullmark, for example, used to watch replays of bad goals he allowed during intermissions.

“I just got caught worrying too much about what happened, even though it didn’t happen all the time,” said Ullmark, who played 37 games last season. “If I had a good game, I wouldn’t worry too much. But if I played badly and let in a bad goal, yeah, I wanted to see it right away. I got caught up too much in the past.

“So that was one of the main focuses in the beginning, and then we just kept on working on different things to give myself a little bit of peace and quiet when the stress level around me rises.”

Ullmark said Hutton, 34, and goalie coach Mike Bales have been great “role models” for him.

“Just try to keep it even-paced, because they know how fast it goes and how quick your career is over, everything like that,” he said. “So enjoy the moment and don’t worry too much.”