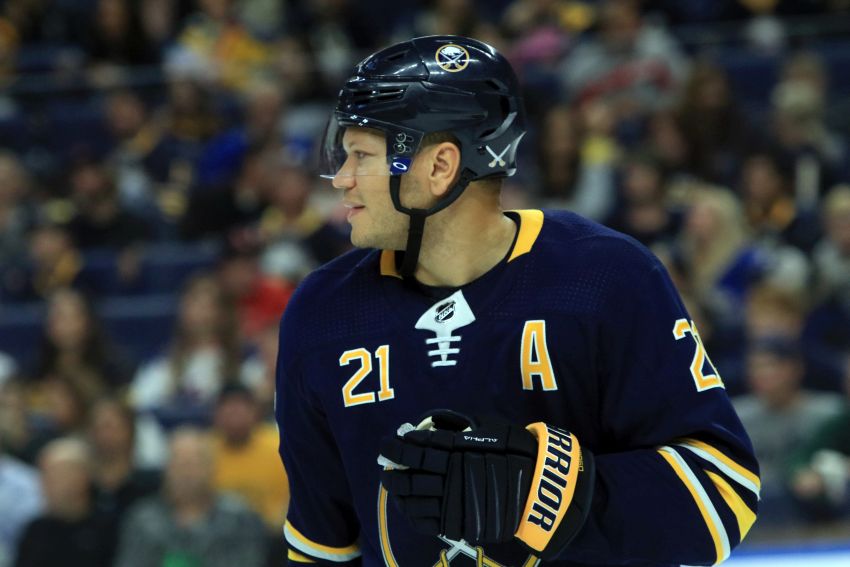 BUFFALO – Over the last week or two, Sabres winger Kyle Okposo has finally started showcasing signs of his old self, playing a heavier, straight-line game.

“He’s going to the net a lot better,” Sabres coach Phil Housley said prior to Saturday’s 5-3 loss to the Tampa Bay Lightning inside KeyBank Center. “I think he’s attacking off the wing and he’s shooting a lot more.”

Not surprisingly, Okposo has started scoring a bit. After enduring a career-worst 21-game goal drought – he was pointless in the last 14 outings of that rough run – Okposo had compiled two goals and three points in the last five contests entering Saturday.

“The last eight, probably nine games now I’ve played better,” said Okposo, who scored Friday. “I just have to keep going, keep being hungry to score. I think I’m doing a lot of things well not in the offensive zone that are leading to more offensive zone time and offensive zone chances.”

Being a bullish power forward is Okposo’s bread and butter. It has helped him score 18 or more goals in a season seven times and become an NHL All-Star.

“I like the physicality he’s bringing,” Housley said. “He’s finishing his checks. I think it gets him into the game more, and now he’s just playing the game instead of thinking the game.”

Okposo scored seven goals and 18 points in his first 44 games. Those number, of course, hardly match his seven-year, $42 million contract.

Still, following a full summer of training – he couldn’t do that in 2017 as he was recovering from a scary concussion – he enjoyed a solid start this season, scoring five goals and 14 points in the first 22 games.

It’s not crazy to think Okposo could finish strongly and flirt with 20 goals.

Okposo has spent the last two weeks skating beside center Johan Larsson and another winger on what could be considered the fourth line. Right away, the move helped buoy Okposo.

“He does a really good job in the defensive zone of coming low and supporting the puck,” Okposo said. “He’s been kind of creating that momentum up the ice. He makes it easy for you to give him the puck, and then he comes up with speed through the middle of the ice, so you’re able to play more in the offensive.

“He does a really good job down low in the defensive zone being hard on guys, being physical, killing the play and then we’re able to go play offense. He’s played great this year and he’s definitely helped out my game, too.”

Sabres winger Jeff Skinner scored 30 goals in only 44 games, tying him with Rick Martin as the sixth-fastest Sabre to reach the mark.

Hours before scoring his 30th in Friday’s 4-3 loss to the Hurricanes, Skinner, 26, was voted into the NHL All-Star Game as part of the NHL’s “Last Men In” online balloting.

“To see the passion of the fans and to see them sort of rewarded is a pretty cool feeling,” Skinner told reporters in Carolina.

After recording a goal and three points Saturday, Lightning winger Nikita Kucherov has already compiled 22 goals and 75 points, putting the Russian on pace for a whopping 137 points. That would be the NHL’s highest total since Jaromir Jagr had a 127-point season in 1998-99.

“I don’t think it’s another level, I just think it’s that’s how good he is,” Lightning captain Steven Stamkos said. “We saw it last year, we’re seeing it this year. We’ve seen it for a long time now, he’s one of the best in the league.”

Notes: The Sabres scratched defenseman Matt Hunwick for the 10th straight game. Meanwhile, defenseman Nathan Beaulieu sat out his fifth consecutive contest. They also scratched winger Remi Elie. … The Sabres don’t play another home game until Feb. 1 against Chicago. … In his first game with the Rochester Americans following a four-game stint with the Sabres, winger C.J. Smith scored a hat trick in Saturday afternoon’s 5-1 road win against the Toronto Marlies.