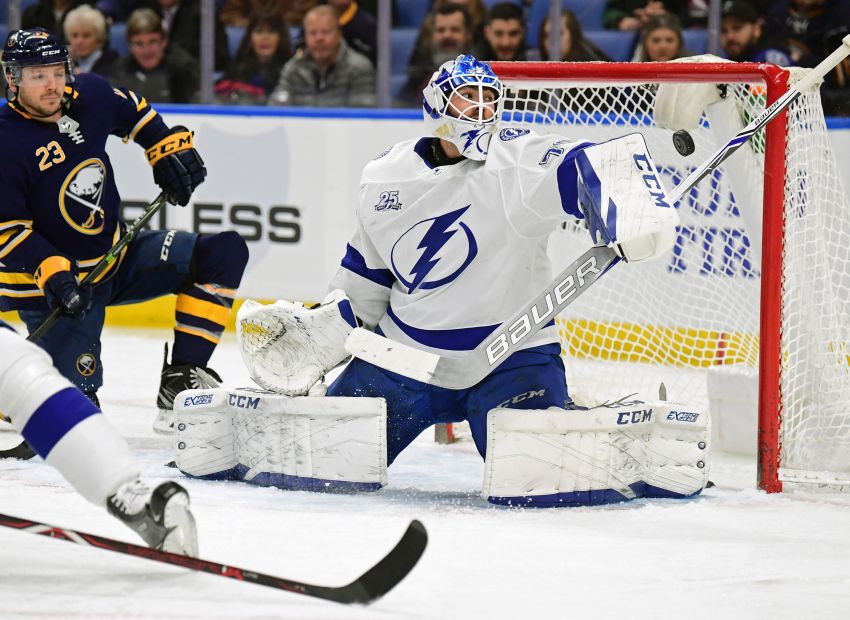 BUFFALO – Twenty games ago, the upstart Sabres grabbed the top spot in the NHL after winning their 10th straight contest.

At that point, 25 games into the season, the Sabres appeared ahead of schedule. While many observers believed they could possibly contend for a playoff spot, few thought they would be the league’s best team more than a quarter into the campaign.

Fast forward to today, and the Sabres have fallen hard. Yes, they’re still much better than a year ago, when they finished dead last. But they’re 6-10-4 since their long winning streak ended.

Saturday’s 5-3 loss to the heavyweight Tampa Bay Lightning coupled with the Montreal Canadiens’ victory pushed the Sabres one point out of a playoff spot.

“We’re right there, we’re right in the hunt, that’s where we wanted to be at the start of the year,” said Sabres winger Sam Reinhart, who scored his 10th goal. “We’ve got to embrace that challenge and get back to putting points up more consistently.”

The Sabres had the Lightning on the ropes before the capacity crowd of 19,070 inside KeyBank Center. It could’ve been the kind of win that would ignite their season.

The Sabres went up 3-2 when defenseman Marco Scandella zoomed in through the slot and connected on Jason Pominville’s saucer pass 5:54 into the third period.

Then the Sabres imploded. The lead lasted 23 seconds.

Lightning superstar Nikita Kucherov tied it before setting up captain Steven Stamkos’ go-ahead goal at 14:44 during a four-on-four with Sabres star Jack Eichel off for a questionable elbowing penalty.

“They’re deep, for sure,” Pominville said. “Their top guys right now are playing phenomenal hockey for them.”

“We’ve got to fight and keep clawing away,” Sabres coach Phil Housley said. “We knew that nothing was going to be easy from this point moving forward, and I think that’s a valuable lesson for our guys that it’s going to take every shift, every period, every game, a 60-minute effort. We can’t take anything for granted.

“But at the same time, I think there’s a lot of valuable lessons that we’re learning. If we play a 60-minute game like we’re capable, we’ll get on the right side of things. We’re facing a little adversity here and we have to overcome that.”

Forty-five days ago, the Sabres roared into Tampa Bay first overall. While they lost 5-4 and fell one point behind the Lightning, the end of their raucous run felt like the start of something special.

The NHL’s best club is now 20 point ahead of the Sabres.

How good are the Bolts? They’re 35-8-2 overall, an astonishing mark in an age of parity.

Tage Thompson scored the Sabres’ other goal, giving them a 2-1 lead late in the first period after falling behind 26 seconds in. Goalie Linus Ullmark made 25 saves during just his third regulation loss in 16 appearances this season.

“The lesson is – and I’ve said it before – every shift and every play matters, especially against good teams,” Housley said. “You have to make the right decisions at the right times. You have to take what the game gives you.”