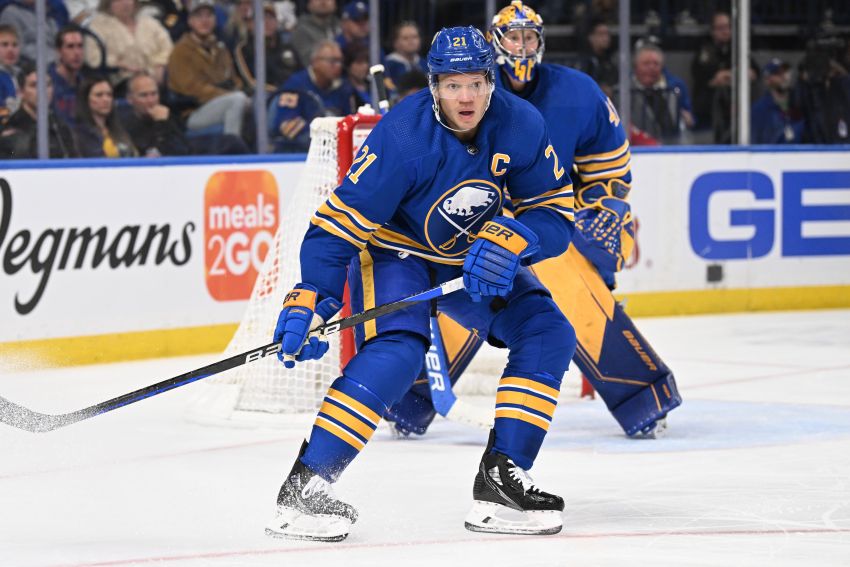 BUFFALO – Peyton Krebs’ return to the lineup lasted one game.

“Just some wear and tear I’ve been dealing with and had to give it some time to calm down,” Okposo said prior to the Sabres’ 3-1 loss at KeyBank Center. “But feeling better, ramped it up over the past few days.”

Okposo, 34, recently began skating on his own before joining his teammates Friday morning. The American skated at right wing beside center Tyson Jost and Zemgus Girgensons against the Devils.

To make room for Okposo, Krebs, 21, was a healthy scratch for the second time in three games. He has mustered zero goals and three assists in 17 contests this season.

In other news, defenseman Jacob Bryson suffered a lower-body injury in Wednesday’s 6-2 win over the St. Louis Blues and is week to week, according to the team. Bryson, 25, left the game after the second period.

“It was not an impacted incident that occurred within the game,” Sabres coach Don Granato said of the injury. “I asked the same thing at the end of the period before the third. It was one of those that you can do on your own.”

By claiming Jost, 24, off waivers last Saturday, the Sabres added much-needed forward depth and increased internal competition. He was an immediate upgrade over Anders Bjork and Riley Sheahan, who had been filling in on the fourth line.

Jost, a veteran of 357 NHL games, has already passed Krebs on the depth chart.

“He’s still a young guy and a talented guy but he has a wealth of NHL experience,” Granato said. “… He has a lot of experience, a very high self-expectation that he expects more out of himself all the time and he’s hungry for more out of his career. It definitely adds competition in the lineup because now it’s another guy we picked up that can bump somebody out.

“We know he’s capable of playing, we know he fits the criteria we’re looking for in young guys with a lot of potential still. Internal competition is great.”

Granato said he could see Jost’s excitement over joining the Sabres in his body language when he joined the team Monday. In his first shift in his debut, Wednesday’s 7-2 road win over the Montreal Canadiens, he hit Chris Wideman hard into the end boards and fought the defenseman.

It was just the second scrap of his career, according to hockeyfights.com.

“It just kind of happened. … I got him pretty good,” said Jost, the 10th overall pick in 2016. “He obviously didn’t like it. The opportunity was there.”

The Sabres on Friday sent forward prospect Matej Pekar from the Rochester Americans to the Cincinnati Cyclones, their ECHL affiliate.

Pekar, 22, recently made his season debut after undergoing surgery on both shoulders. Joining the Cyclones will allow the Czech to receive more ice time. He played just twice in the AHL this season.