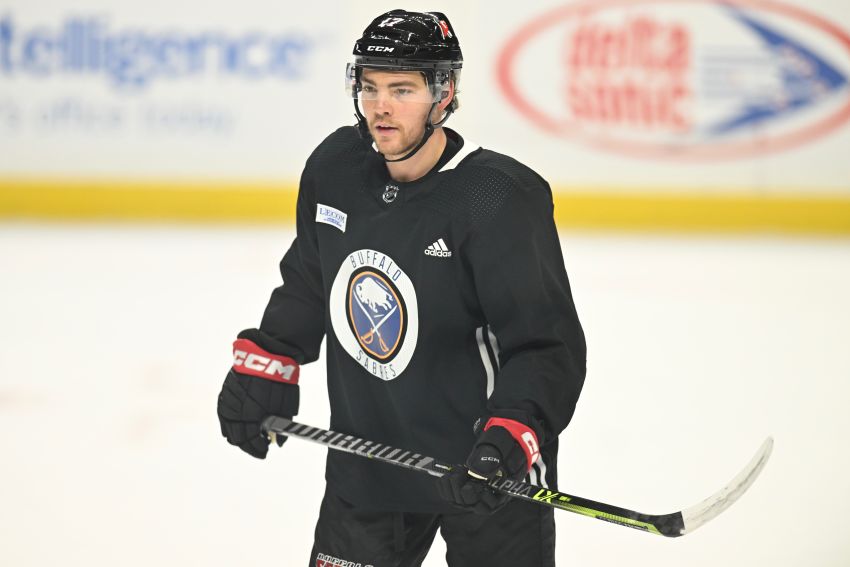 BUFFALO – Tyson Jost couldn’t watch. The Sabres newcomer had spent almost six years in Colorado, growing from a teenage prospect and 10th overall pick into one of the Avalanche’s regular forwards.

As his old team roared to a Stanley Cup championship last season, Jost, who was traded to the Minnesota Wild on March 15, shut his television off.

“It was tough, it was hard,” said Jost, who was claimed off waivers by the Sabres on Saturday. “… You kind of think I could have been there but that’s the past and you got to move on. I’m a Buffalo Sabre now and I’m happy to be here. I’m honored for the opportunity and I want to get back to that player I am.”

That player intrigues the Sabres, who have lost eight straight games entering tonight’s road contest against the Montreal Canadiens.

“I can play in a lot of situations,” he said following’s Monday’s practice at KeyBank Center, his first with the Sabres. “In Colorado, I kind of did that. I could be a PK guy, play on the power play, I could play third line. I could kind of move up and down the lineup and play a lot of different situations.”

The Sabres needed to beef up their forward depth, especially because they want to keep their top prospects in the minors. They also had to find help to improve their penalty killing, which has allowed a goal in nine straight games.

“He checked all the boxes,” Sabres general manager Kevyn Adams said. “… When you look at Tyson, individually, young player still, skates well, a lot of talent, makes plays at top speed. He can kill penalties. He’s young but he’s also 350-something games of NHL experience.

“So he’s been through the league, he’s been around, I think he’s at a great age. And from the character standpoint, I had one person get back to me and said, ‘elite human being.’”

Sabres coach Don Granato said: “He has a very solid reputation not only as a skill player but as a person. He’s a young talent. He fits what we’re doing.”

Having joined the Avalanche at its nadir in 2016-17, a wretched 48-point season, Jost played a role in the team’s development into a powerhouse. While he missed out hoisting the Cup, he has been a part of a winning organization.

“I definitely could bring some experience because I’ve been with Colorado for so long and I learned a lot there with that organization and then having success,” he said. “I kind of started with Colorado when we were at the bottom and were working our way up. So I think I can bring some leadership in that aspect.”

Jost also believes he can bring a stronger game. Yes, he’s an established player. Still, he said he possesses upside and can keep growing.

“That’s something I just keep telling myself and that’s kind of in the message from the organization here, too, and kind of my camp, I guess you could say as well,” he said. “I’m 24 years old, I’m still young, and to kind of look around this room and that’s why I think I’ll gel really good with those guys.”

He struggled in Minnesota, compiling just two goals and nine points in 39 games, including six playoff appearances last year. Following a strong preseason this year, he mustered just three assists as the Wild got off to a slow start.

On Friday, he was placed him on waivers.

“Maybe for him, it’s kind of an opportunity to just free up and play,” Adams said. “Sometimes that’s all it takes because the talent and all of that’s there.”

Jost said the past few days have been a “whirlwind.”

“There’s a lot of emotions,” he said. “I was excited, though. Obviously, there’s a great young core here and a lot of great up and coming talent. Watching these guys play, it’s fun to watch, the team’s exciting.”