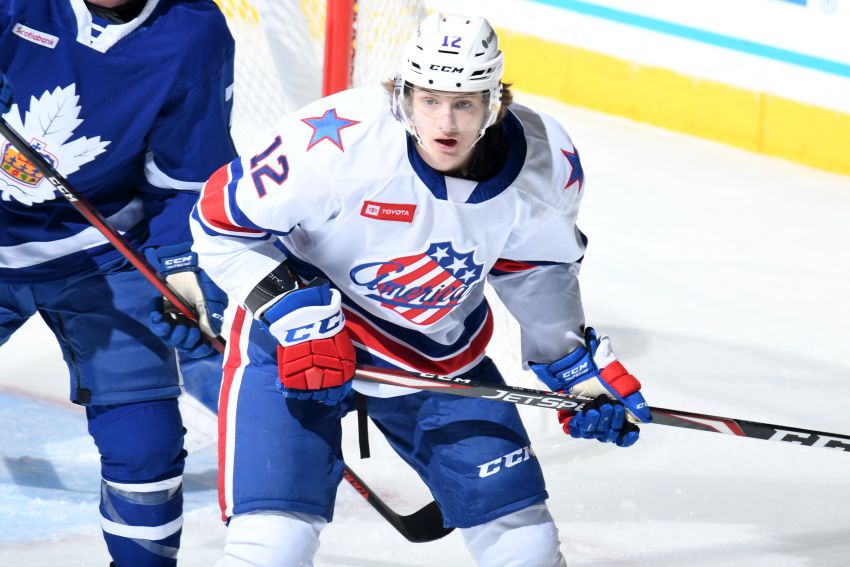 By late last winter, Buffalo Sabres prospect Matej Pekar had lost confidence his ailing shoulders could hold up for the final stretch of the grueling AHL season.

Pekar, an ultra-aggressive agitator, thrives on contact. But his shoulders had become so wonky he said each one would often come out of its socket.

“Playing through it at the end, it wasn’t great, I would say,” he told the Times Herald on Wednesday. “It was just like kind of hurting.”

So he was sent for an MRI and told to undergo surgery on both shoulders. He said his right one had a chipped bone and missing cartilage.

“At the end of the day, he knew he wasn’t allowed to be effective or to be able to play the style he needs to play to be a really good hockey player,” Rochester Americans coach Seth Appert said on a Zoom call Tuesday.

Right now, the 22-year-old feels so good Appert said he could play again within two weeks.

“It was disappointing at the moment that I had to get a surgery,” said Pekar, who began practicing with the Amerks last week. “But I feel much better with the shoulders and everything.”

He added: “I’m excited. It’s been a long, long journey to recover.”

Pekar said he had one surgery in late March and the other in late April. When he went home for the summer, he said his mother, Monika, a physical therapist, helped him with his rehab.

He said he started skating again in Buffalo last month but missed all of training camp. The Sabres officially assigned him to the Amerks on Oct. 17.

“Matej has done a really good job keeping his attitude right and his work ethic,” Appert said. “His work ethic is really outstanding. I mean, it’s high-end work ethic. So he attacked his rehab and his work in the weight room with our strength coaches and the trainers in a really, really first-class manner. So he’s another guy that you root for because of that work ethic, because of how much time he puts in, the extra time he puts in in the weight room and the training room.”

Whenever Pekar makes his season debut, expect him to showcase his usual tenacious style and get under the opposition’s skin. His injury won’t be in the back of his mind.

“When the time comes, I’m very confident I’ll be ready to go,” he said.

A few years ago, Pekar, a fourth-round pick in 2018, 94th overall, was regarded as one of the Sabres’ top forward prospects. But over time, as other youngsters entered the organization and he adjusted to the AHL and battled injuries, he has become a bit overlooked.

At he begins his third pro season, he has played just 72 games with the Amerks, compiling four goals, 12 points, a minus-14 rating and 106 penalty minutes.

If the COVID-19 pandemic hadn’t forced the AHL to play a truncated schedule in 2020-21 or if he had remained healthy, he might be further along in his development.

“The way I look at it, I have the season ahead of me and that’s the thing I’m focused on,” he said.

The Amerks announced on Wednesday that defenseman Brandon Davidson, who was added to the roster on Tuesday, has signed a professional tryout. Davidson, 31, is expected to meet the Amerks this weekend in Laval for their two-game set against the Rocket.

The Sabres, who had Wednesday off after closing their four-game road trip, host the Montreal Canadiens tonight at KeyBank Center.