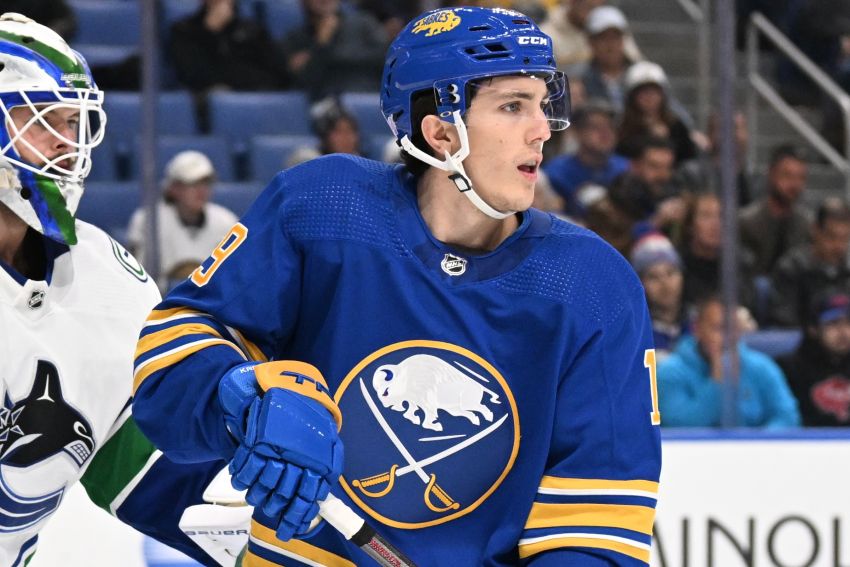 BUFFALO – The Sabres recently stopped their forward rotation, so anyone who sits out as a healthy scratch these days has likely been ineffective, not caught in a numbers game.

Down the stretch as a rookie last season, center Peyton Krebs, 21, established himself as one of the Sabres’ top young forwards. But through 17 outings this year, he has struggled, mustering zero goals, three assists and just 10 shots on goal. He has also lost his regular spot on the power play.

The Sabres scratched Krebs for Tuesday’s 7-2 road win over the Montreal Canadiens. He returned, however, for Wednesday’s 6-2 win over the St. Louis Blues, replacing winger Rasmus Asplund, who’s day to day with an upper-body injury, coach Don Granato said.

“He probably could’ve played, but the style we need him to play, he’s better off (resting),” Granato said prior to the game at KeyBank Center.

Krebs, who had recently been playing left wing, pivoted Zemgus Girgensons and newcomer Tyson Jost against the Blues.

Naturally, Granato said Krebs has “been challenged with confidence.” He attributes some of Krebs’ problems to the injuries the Sabres have dealt with on defense.

“It’s challenging when you’ve had the back end on the defensive side disrupted,” he said. “So that’s going to curb everybody’s offense. It’s going curb (Casey) Mittelstadt’s offense, for example. Because if you look at the analytics, we’ve got (Rasmus) Dahlin and (Owen) Power out a lot with the (Tage) Thompson line, which means the other lines don’t have the offensive power of those guys. …

“That’s been part of it for all of the guys (is) who are you on the ice with? Is it more offensive defenseman or is it we had a lot of young guys back there that are just trying to keep it simple with the puck, not concentrate much on offense? So I think that’s affected Krebs a little bit where he’s tiered obviously, and his confidence has not been where it was last year. And that is everything.

“He’s played with a little bit of anxiety and I think that’s resolving.”

Granato said Sabres captain Kyle Okposo, out the last six games recovering from a lower-body injury, skated on his own again Wednesday and will rejoin his teammates for Friday’s morning skate.

St. Louis coach Craig Berube was an associate coach when Thompson, the Sabres’ top center, played his first 41 NHL games with the Blues in 2017-18.

Thompson, of course, has morphed into a star over the last year. He began Wednesday’s game with 13 goals and 26 points in 19 contests.

Five years ago, he was a scrawny 6-foot-6 rookie.

“Great kid, great skill,” Berube said. “He was so young and immature at that time, physically, not mentally. Now he’s grown into a very good player. There wasn’t probably too many people who’d think he’d become a real good player. He had the ability, he had a great shot. He’s got really good character.

The Sabres scratched defensemen Casey Fitzgerald and Lawrence Pilut (both healthy) for the second straight game.