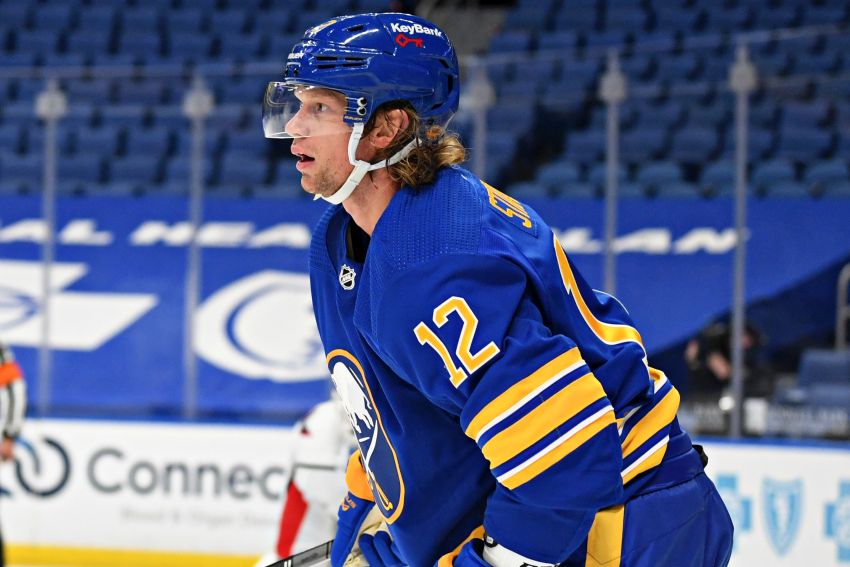 BUFFALO – When Nic Dowd elbowed Eric Staal in the jaw late in Thursday’s 6-4 season-opening loss, it looked like the Sabres center could be sidelined for a while.

The Washington Capitals center knocked the 6-foot-4, 195-pound Staal to the ice and out of the game.

But Staal, who has remained remarkably durable over his 17-year NHL career, played in Friday’s 2-1 loss to the Capitals at KeyBank Center, pivoting the second line.

Krueger said rookie Dylan Cozens, who made his NHL debut Thursday at right wing, could’ve be an in-game option to play center, his natural position.

“We love the way Dylan entered yesterday,” Krueger said on a Zoom call. “He was extremely responsible, being able to break down video now last night and this morning. You could really see how smart he is in both directions and you can see the center experience in him.”

Staal has played 81 or more games 11 times in his career. He missed one game in his first five NHL seasons.

On Thursday, Sabres defenseman Rasmus Dahlin skated a game-high 25 minutes, 25 seconds in his first game in more than 10 months.

“Dahls ended up with a lot of minutes because we were down and he truly is that creative spirit in the group in his offensive strength,” Krueger said. “The minutes were a little bit high for somebody coming out of a 10-month break and you could see some fatigue on some of the shifts defensively. But his hands, his offensive vision, some of the playmaking was outstanding.”

Sabres goalie Linus Ullmark, who missed the first four sessions of training camp because had to quarantine, made his season debut Friday,

“I’ve been away from the game for 10 months,” he said. “So a couple days here and there doesn’t really matter. It’s still the same game. It’s like riding a bike, you know? You just got to go out there, play my heart out and just enjoy the moment.”

Then Rieder, 28, scored three short-handed goals in 10 playoff appearances. That outburst ignited his confidence, and he has carried it into this season.

Rieder, who enjoyed a two-goal night in the Sabres’ second scrimmage, scored in Thursday’s opener.

“It started with the playoffs last season with Calgary,” Rieder said. “It was nice to pick up right where I left off in the scrimmages and obviously get the first one out of the way.”

Cozens, the seventh overall pick in 2019, on his first NHL game: “There was some nerves. I think after I got that first shift out of the way and got my legs under myself, I think that’s when I started to settle down just after that first shift.”