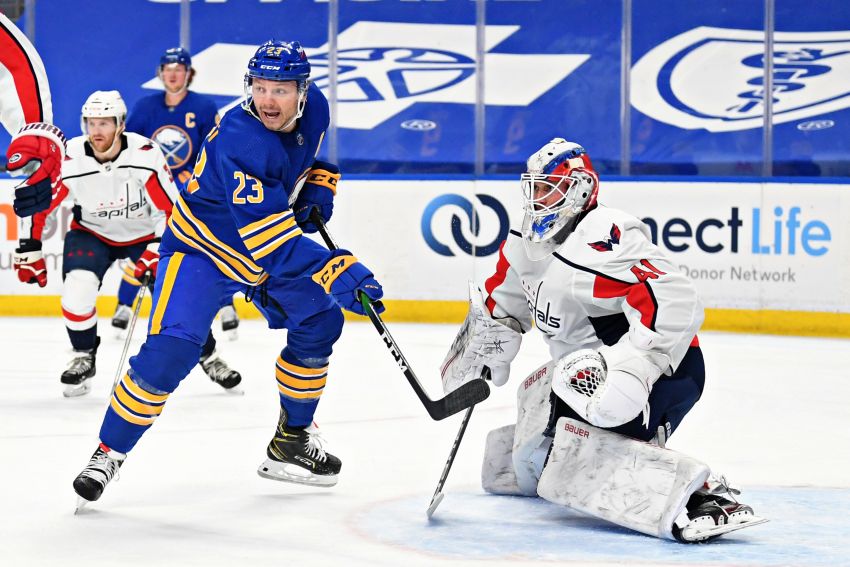 BUFFALO – A night after the Sabres looked like they hadn’t played a game in 10 months, they settled down defensively, generated offense and outplayed the Washington Capitals.

Of course, it did not result in a win for the Sabres, who couldn’t exploit Capitals goalie Vitek Vanecek in his NHL debut.

“I think we made him look good,” defenseman Rasmus Ristolainen said on a Zoom call after Friday’s 2-1 loss at KeyBank Center dropped the Sabres to 0-2 this season.

The Sabres pumped 29 shots on Vanecek, a Czech in his sixth pro season. Only Ristolainen’s wrist shot from the point 31 seconds into the third period beat him.

“Vanecek plays the game of his life here tonight and congratulations to him,” Sabres coach Ralph Krueger said. “I mean, he really played well. I thought we were bringing pucks to the net, we had traffic to the net, we hit metal, we hit the posts, we hit feet. What’s important is that we did create opportunity.”

“We beat them in pretty well every category except for the scoring,” he said. “It was excellent to see the execution, extremely painful to see the final result. But what changed was we outskated them, we put pucks into places where we created foot races and they really struggled with that. We just ran into an extremely hot goaltender at the other end.

“There’s not much of the five-on-five game that we didn’t like tonight. You can take a lot of confidence out of that game and hopefully the guys, they’re able to absorb this pain properly.”

The most painful moment occurred 7:47 into the third period, when Washington’s Tom Wilson broke the tie. After Sabres defensemen Colin Miller fell down in his own zone Wilson beat goalie Linus Ullmark from the right circle.

The Sabres now have two days off until they begin a two-game road set against the Philadelphia Flyers. Expect to see some line changes before those contests.

During Friday’s game, Krueger moved Sam Reinhart to right wing beside top center Jack Eichel and Taylor Hall. Meanwhile, Jeff Skinner subbed for Hall when he missed a few shifts after a puck hit him in the mouth.

“The biggest move we made was Sam Reinhart with Taylor Hall and Jack Eichel,” Krueger said. “It was a pity that Taylor took that puck in the mouth. We lost him for about three shifts. It stopped the momentum that really came out of that line coming together just after the mid-point of the second period.

“We’ll have to take a close look at that as an option with Eichel. Where Jeff lands in the whole thing, we’ve got a couple of days here to regroup.”

Skinner, of course, has been skating on the fourth line. But he enjoyed a terrific game Friday, creating offense and drawing a penalty through his tenacity.

“He was moving a lot, created some opportunities, made some good defensive decisions and steals,” Krueger said. “Throwing him in different spots is something you do when you try to score.

“I mean, Jeff is a scorer and always a scoring threat. We’d like to see him ignite soon.”

Skinner, who scored 40 goals two years ago, said he’s “pretty confident in what I can do in this league and how I can produce and how I can help the team.”

“Our line played well,” he said. “I thought (Curtis) Lazar and Riley (Sheahan) were hunting pucks down and we were able to generate some offensive zone time and, as a result, draw some penalties and get some good chances.”

The Sabres did not generate many good power-play chances. The units struggled, going scoreless in five tries, including an opportunity in the waning minutes.

“Our power play just didn’t get the job done today,” Krueger said. “That’s really where we’re going to dive as deep as we can to try to make that more productive in the future.”

The Sabres did not take any penalties. Jakub Vrana scored Washington’s other goal.

One thought on “Sabres outplay Capitals, can’t exploit rookie goalie: ‘We made him look good’”