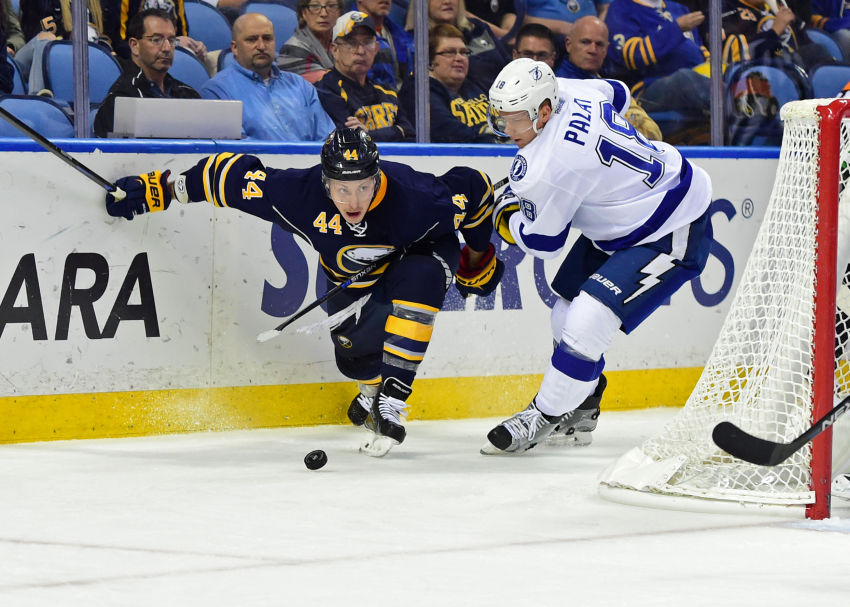 BUFFALO – Without his gritty, sandpaper style, Nick Deslauriers morphs from a strong fourth-line winger into a journeyman the Sabres are willing to scratch.

Sure, the popular 24-year-old possesses a strong shot, chips in the odd goal and even occasionally earns fill-in duty on a scoring line.

But physicality, something Deslauriers’ game has been lacking recently, is his bread and butter.

So on Thursday following the pregame warm-up in Florida, Sabres coach Dan Bylsma told Deslauriers, who played all 82 games last season and the first 15 this year, he would be scratched against the Panthers, something that “wasn’t pleasant.”

“It is hard,” Bylsma said. “I think he is and will be a big part of our team and how we play.”

However, Bylsma, who often lauds Deslauriers, wanted to send a message, so he inserted Tim Schaller for the Sabres’ 3-2 win against the Panthers.

Deslauriers returned Saturday for the Sabres’ 2-1 overtime loss to the San Jose Sharks inside the First Niagara Center. Schaller was scratched to make room.

“What made Nick an option to take out of the lineup was just how he played away from the puck, some of the decisions that he made, responsibilities away from the puck,” Bylsma said. “He’s not hard enough to play against. That’s a big part of his game and what he’s got to bring and what’s expected of him when he gets in the lineup.”

Deslauriers said he was “definitely” surprised to sit.

“I think I’m just happy the boys won,” he said. “It was frustrating, but we got a win there. The next day it just passed over.”

Deslauriers understands he has to play a grittier style. Hits can be an iffy statistic – counts vary wildly from rink to rink – but he had 286 last season, 3.2 a game. He had 51 hits, 2.4 an outing, entering Saturday. He had zero in Tuesday’s 4-1 win in Tampa Bay.

“Lately, it’s just been I didn’t establish a forecheck much and just didn’t have a chance to finish my hits and everything,” Deslauriers said. “I need to be better pretty much everywhere.”

Still, Deslauriers has been impressive at times this season. Bylsma briefly moved him up with No. 1 center Ryan O’Reilly earlier this month. Deslauriers also has three goals, as many as captain Brian Gionta, Zemgus Girgensons and Marcus Foligno have combined.

With the arena illuminated with the blue, white and red of the French flag, the Sabres held a moment of silence prior to the game in memory of the victims of Friday’s terrorist attacks in Paris.

The Sabres also posted the message “We stand with Paris” on the video boards.

With an assist on Ryan O’Reilly’s goal, Sabres defenseman Rasmus Ristolainen tied his career-long point streak at four games. The Finn, who has 11 points, skated a career-high 29 minutes, one second against the Sharks.

The NHL honored linesman Scott Driscoll for his 1,500th game prior to the opening faceoff.