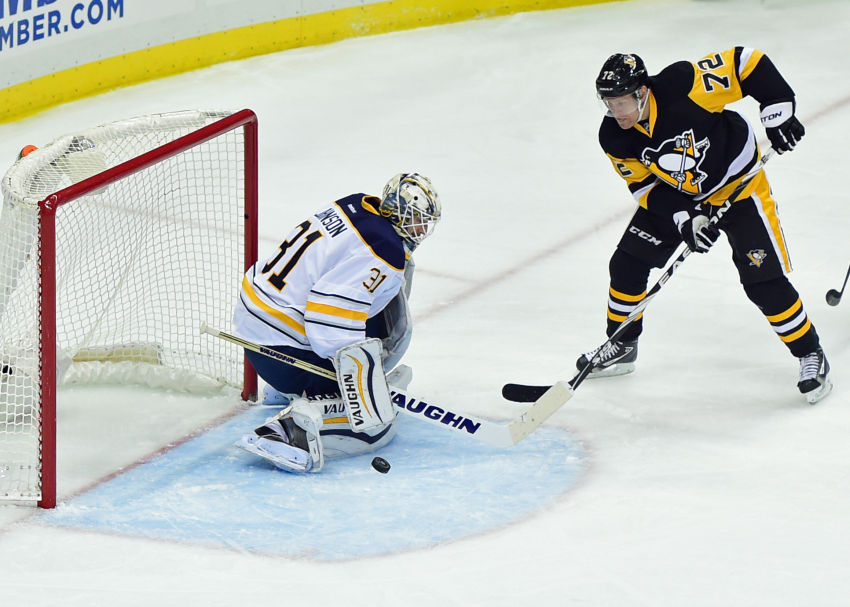 So which netminder will Sabres coach Dan Bylsma use tonight against the San Jose Sharks inside the First Niagara Center? Johnson will make his 12th appearance this season.

“I think for any goalie the more you play the more you kind of get in the groove,” Johnson said this morning.

Johnson, despite alternating with Ullmark for four games, has found a nice groove. He’s gone 128 minutes, 52 seconds without allowing an even-strength goal, stopping his last 44 shots. Overall, he’s 4-6 with a 2.75 goals-against average and a .896 save percentage.

Meanwhile, Bylsma said the rest of the lineup – that’s likely a decision between fourth-liners Nick Deslauriers or Tim Schaller – will be a game-time decision.

The gritty Deslauriers, who played all 82 games last season, was a surprise scratch last game. Why?

“In big portions of what made Nick an option to take out of the lineup was just how he played away from the puck, some of the decisions that he made, responsibilities away from the puck,” Bylsma said. “He’s not hard enough to play against. That’s a big part of his game and what he’s got to bring and what’s expected of him when he gets in the lineup.”

“Lately, it’s just been I didn’t establish a forecheck much and just didn’t have a chance to finish my hits and everything,” he said. “I need to be better pretty much everywhere.”

In other news, Bylsma said defenseman Mike Weber will be sidelined two to six weeks after undergoing knee surgery Friday.