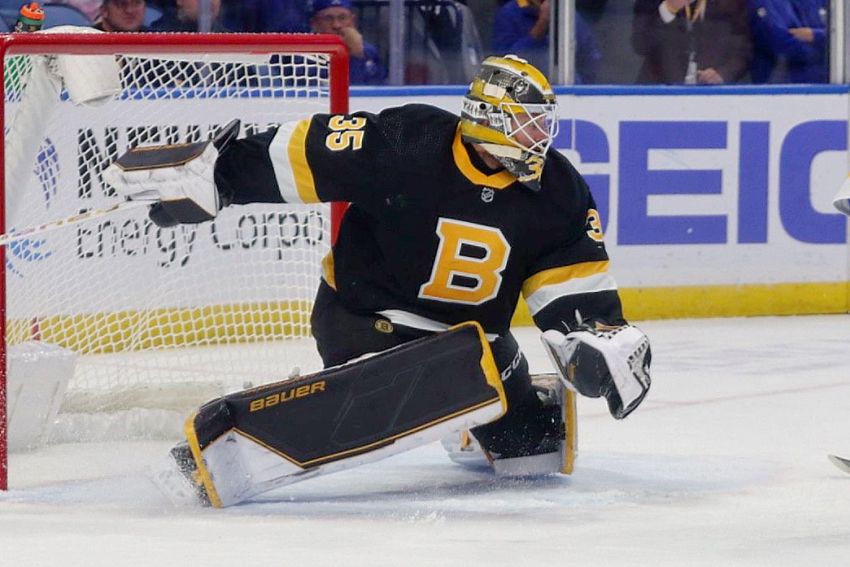 BUFFALO – In jumping out to their best start in 13 years, the Sabres feasted on some weak teams. Yes, they deserved their 3-0 record. But they hadn’t faced an opponent the caliber of the heavyweight Boston Bruins.

The Sabres stumbled in their first significant test, falling 4-1 on Friday to old friend Linus Ullmark and the Bruins before a crowd of 7,820 fans inside KeyBank Center.

Still, they pounced on the Bruins early, outshooting them 15-7 in the first period. The Sabres held a whopping 29-8 advantage in shot attempts through 20 minutes, according to NaturalStatTrick.com, yet they ended the period trailing 2-0.

The Sabres did not generate enough prime scoring chances around the net. And when they broke down defensively, the Bruins capitalized.

“We hadn’t had a problem with that (until) tonight, so … it falls in the same category you’re looking for a pretty play instead of a direct play,” Sabres coach Don Granato said.

After disposing of the Montreal Canadiens, Arizona Coyotes and Vancouver Canucks, Granato said the Sabres played tight and pressed against the Bruins.

Bruins star David Pastrnak opened the scoring at 3:49 before Tomas Nosek followed at 15:50.

Despite suffering their first loss, the Sabres, who play their first road game tonight against the New Jersey Devils, feel encouraged.

“We did a lot of good things today,” said Sabres winger Victor Olofsson, whose goal 14:35 into the third period narrowed it ti 3-1. “That’s a really good hockey team and … I feel like we gave them a couple of goals that we probably could’ve prevented.

“But still, we created a lot of scoring chances and I think that we probably could’ve scored a couple more.”

Overall, the Sabres outshot the Bruins 36-26.

“We played a really good game against them,” Sabres center Dylan Cozens said. “I think we outchanced them and if a few more bounces went our way, I think we definitely could’ve won that game.”

Cozens was the Sabres’ best player, registering six shots on goal, including one Ullmark stopped on the goal line. Cozens is confident he will eventually bury some opportunities.

“I’ve been a goal scorer my whole career, so I don’t let that get away from me now,” he said. “I want to keep shooting the puck and eventually one of them’s going to go in.”

Granato said: “For Dylan, you definitely see him doing more and more of the right things. That’s part of the progression for him.”

More games like Friday’s are on the horizon. After tonight’s contest, the Sabres host the Tampa Bay Lightning, the two-time defending Stanley Cup champions, on Monday.

Ullmark, who left the Sabres to sign a four-year, $20 million contract, said earning his first win with the Bruins in Buffalo will be “one of those lifelong memories.”

Charlie Coyle and ex-Sabres bust Taylor Hall, who was booed every time he touched the puck, scored the Bruins’ other goals.